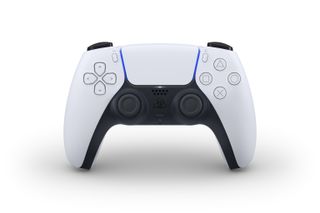 Sony has just revealed the controller for the PlayStation 5 (PS5). It's called DualSense, which is a departure from the DualShock name of PlayStation controllers past. The controller, which has a two-toned design, is our first look at Sony's new gaming hardware. We don't yet know if the controller will come in colors other than white and black.

In its announcement, Sony said that the controller should bring a sense of touch to games, as well as sound. Sony is adding haptic feedback, plus "adaptive triggers" to L2 and R2, which the company said adds the feeling of tension.

There are also some ergonomic changes, and Sony suggested that the controller feels smaller than it looks. The grip has changed, as have the angle of the triggers. From a photo, it appears that the DualSense charges over USB Type-C instead of the DualShock 4's MicroUSB.

The share button from DualShock 4 has been replaced with a "Create" button, (sharing features aren't going away, Sony noted), and the features will be detailed at a later date.

Additionally, DualSense will have a built-in microphone array, so that you can chat-in game without a gaming headset. DualShock 4 had a built-in for speaker that some games used for sound effects, but never for chat. Sony is still recommending headsets for long chat sessions.

The light bar, which can be used with cameras to track the location of the controller in some games, is now wrapped around the touchpad, rather than placed at the very top of the controller like in the DualSense's predecessor. In practice, the DualShock 4's light bar has been used more for effects lighting in some PS4 games, so it's unclear how it will be used in the PS5.

On DualShock 4, Sony added a number of features, like a touchpad, that were used primarily in first-party games, so we'll have to wait and see if game developers will use features introduced with DualSense more often this time around.

The PS5 is scheduled to launch in time for the holiday season.