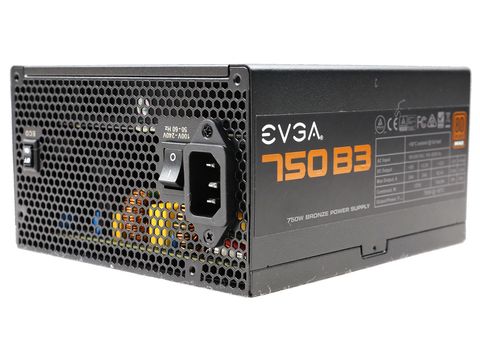 The following graph shows the 750 B3's total performance rating, comparing it to other units we have tested. To be more specific, the tested unit is shown as 100 percent, and every other unit's performance is shown relative to it.

The 750 B3 scores a much higher performance rating than the CX750M. However, Corsair's PSU survived all of our tests. And it sports better build quality.

The following chart may be the most interesting to many of you because it depicts the 750 B3's performance-per-dollar score. We looked up the current price of each PSU on popular online shops and used those prices and all relative performance numbers to calculate the index. If the specific unit wasn't available in the United States, we searched for it in popular European Union shops, converting the listed price to USD (without VAT). Note that all of the numbers in the following graph are normalized by the rated power of each PSU.

Corsair's CX750M easily takes the lead since it costs less (at least when this was written).

EVGA's 750 B3 is a little bit quieter than the CX750M, which doesn't have a semi-passive mode and endures a higher minimum fan speed. The overall noise difference isn't large though.

EVGA's and Corsair's efficiency levels are similar, even though the 750 B3 uses a more capable platform. Most likely, the 750 B3's fully modular design is to blame, compared to the CX750M's semi-modular implementation. Fixed cables have lower losses, especially under high loads, since their resistance is minimized compared to modular cables.