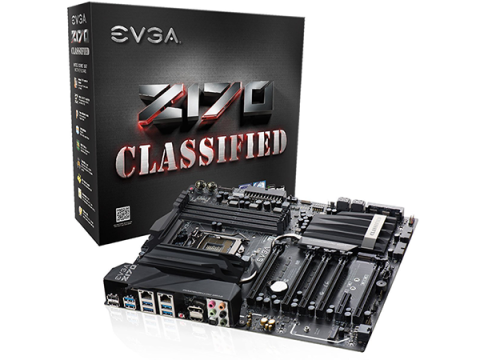 A solid overclocker and the least-expensive multi-way SLI motherboard for Skylake processors, EVGA’s Z170 Classified fills a market gap not-yet-approached by its rivals.

Multicast For The Win!

Economics dictates why Skylake only has sixteen PCIe 3.0 lanes, as the same LGA 1151 socket is meant to serve everything from low-end office to mainstream gaming machines. If you want more than that, Intel thinks you should upgrade to a bigger processor on a more expensive board. The problem is, Intel's big processors are always clocked slower using previous-generation technology. Using client systems to work the bugs out of a core before transitioning its tech to servers might make sense to an IT manager, but performance enthusiast don’t like this CPU/GPU performance dichotomy. While some resort to extreme cooling to make up for the per-core performance deficit with added clock-speed, the new cores usually clock even higher on even less cooling for far less money.

Because every card in an SLI or CrossFire array uses exactly the same data, a repeater switch that sends four copies of the same data to four cards works nearly as well as a PCIe controller that has four times as many lanes. NVidia called this “Broadcast mode” when marketing its earlier solution, and Avago now calls it Multicast in the PEX 8747. The firm’s marketing image still carries the PLX logo of its subsidiary.

EVGA doesn’t exactly stick to the script though. Knowing that “nearly as well” isn’t good enough for those few customers who can’t live with the slight latency penalty of the PEX 8747 switch, it provides them with the single PCIe 3.0 x16 direct CPU pathway option on the board’s top slot. Adding a card to any of the other PCIe x16 slots forces the top slot to donate eight pathways to the PCX 8747. Because the Z170 Classified only serves the PEX 8747 with eight input lanes, all connected devices have a maximum of eight lanes bandwidth, even though these may be detected as having 16 pathways.

Current page: Multicast For The Win!