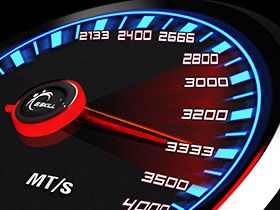 Remember when we used to expect per-DIMM capacity to double with every new generation of RAM? Desktop users witnessed the transition from 2GB DDR to 4GB DDR2 and 8GB DDR3. Yet, now that DDR4 is out, we’re still stuck with 8GB modules. Where are the 16GB DDR4 DIMMs?

It wasn’t so long ago that DDR3 was limited to 4GB per module. This became strikingly clear when one of my friends, a technician, was asked to upgrade a customer’s LGA 1156-based machines. Even with the latest firmware, none of those boards supported any of his 8GB DIMMs. It wasn’t until LGA 1155 that we saw a platform capable of addressing higher-density parts. And speaking of density, early DDR3 modules were limited by the capacity of available DRAM ICs to 2GB per module.

Whatever the reason for today's lack of 16GB DIMMs, the only thing a memory vendor can do for enthusiasts who want 64GB right now is to sell a set of eight modules. Some might call that an octa-channel kit, even though it's designed for quad-channel platforms. We have one such quad-channel kit in-house, which fills each of your X99-based motherboard's eight slots with an 8GB DIMM.

We’ve seen the memory development process follow a specific speed-capacity-speed path over the years, where IC manufacturers typically need several months to increase the performance of higher-density parts to the standards of lower-density predecessors. The tradeoff between density and performance explains why four-by-1GB kits persisted on the dual-channel market long after two-by-2GB kits were available.

Of course, there is a timing penalty to be paid for adding more DIMMs per channel, and we wouldn’t be surprised to hear instability stories from readers who’ve added a second set of their favorite low-latency modules. G.Skill avoids that issue by using CAS 16-16-16 timings.

A bone-stock 1.20V allows these DIMMs to remain cool while tightly packed. The same JEDEC standards don’t allow for a DDR4-2666 data rate. G.Skill programs its F4-2666C16Q2-64GRB to boot at the most compatible DDR4-2133 setting, requiring you, the enthusiast, to enable XMP mode as you chase down the kit's full performance.

The 64GB kit also required 2T timings, whereas we treated the default 2T timings of the four-DIMM sets as a mere suggestion. Next up, overclocking!

Next Page Overclocking, Benchmarks And Analysis
40 Comments Comment from the forums
Be In the Know