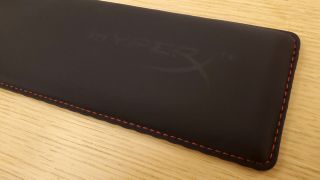 When you're picking out a keyboard for your PC, you're probably putting a lot of thought into what type of switches you need, how much RGB lighting suits your taste and whether you prefer a full keyboard with numpad or a tenkeyless. But for most people -- even keyboard enthusiasts -- the wrist rest is an afterthought, and it shouldn't be.

Even when gaming keyboards come with their own wrist rests, they're usually uncomfortable pieces of rock-hard plastic that keep your palms elevated but irritated (the Razer Huntsman Elite is an exception). You can, of course, live without any kind of wrist support, but eventually you may notice the added stress not only on your wrists but on your arms and shoulders, which have to hold your hands up.

Whether you visit your local office supply store or browse through an online retailer, you'll find many wrist rests of varying sizes, shapes and textures. I've always been partial to soft gel rests, most recently the Staples brand, because they provide the perfect balance between flexibility and support. However, the HyperX Wrist Rest is in a whole different league of comfort and style.

The first thing you'll notice about the HyperX Wrist Rest is how snazzy it looks when compared to other third-party wrist rests. Its top surface is covered with a black spandex-like fabric with a subtle black "HyperX" logo that you only see if you look closely. Bright red stitching adds a nice pop of color around the edges, while a rubber bottom prevents the wrist rest from sliding around.

The top surface of the wrist rest appears to be more durable than others I've tried. My old Staples wrist rest feels comfortable but looks disgusting as its blue surface has worn down and stained over the years. I can't say for certain that the HyperX wrist rest will look like new six months from now, but after using it for over a month, it's still in great shape. When I've spilled crumbs on it, I've been able to wipe them off, without making permanent stains.

The wrist rest is just the right size to cover the width of a full-size keyboard, but that makes it shorter than many third-party wrist rests. My Staples wrist rest is 20 inches (508 mm) long, which means it takes up a lot of extra space on my desk, while the HyperX wrist rest is only 17.5 inches (445 mm) long.

Of course, when it comes to wrist rests, it's what's on the inside that matters most. The inside of the HyperX wrist rest contains a block of memory foam that's surrounded by cooling gel. So you get the firmness of the foam and buoyancy of the gel together in one perfect package.

HyperX's rest feels significantly more comfortable than my old Staples gel rest. It's softer while offering better support and, true to its "cooling gel," it always feels cool to the touch. After doing a "wrists-on" with our demo unit for a few minutes, our Managing Editor, Matt Safford, immediately ordered one for himself and has been using it at work every day.

The HyperX Wrist Rest is $20 (£20), which makes it slightly more expensive than competitors from Staples and 3M, which fall into the $10 to $15 range, but still very affordable. Even if your keyboard came with a wrist rest of its own, the added comfort is worth the premium.