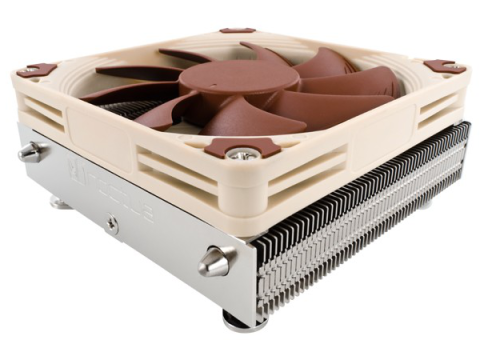 The Noctua NH-L9i is a quiet, high-quality sub-two-inch Mini-ITX air cooler with a price tag to match. Unfortunately, our samples didn't live up to the high expectations that Noctua has set in air cooling.

Enthusiasts interested in small form factor PCs tend to be sensitive to power consumption, since more power-hungry components are harder to cool in the confines of compact chassis. From a purely physical perspective, Intel's CPUs are at an advantage in that regard. But they're also typically more expensive too, which is why we're particularly fond of heat sinks compatible with Intel and AMD host processors.

Unfortunately, Noctua's NH-L9i is only compatible with Intel-based platforms. The good news is that Noctua also sells an AMD-compatible NH-L9a. Its physical design is different, so the cooling performance results you'll see from it are different than what we're reporting here today.

The NH-L9i's first surprise is in the heat sink's sheer weight. Despite a height of just 1.46 inches, it registers 14oz including the fan (but without mounting brackets). This makes it heavier than some of the coolers in the >2-inch category.

Noctua's NH-L9i is almost perfectly square; two of its sides are adorned with the company's logo. Spaced approximately 0.045” apart, the cooling fins are densely packed, which typically suggests that a fast-spinning fan is required to push air through. But because this sink is so thin, slower blades might still yield satisfactory results.

Heat is drawn away from the CPU by means of two 6mm U-shaped pipes, which are embedded in the CPU-facing metal block.

The mounting brackets for Intel's LGA 115x interface are factory-installed. Typical of Noctua coolers, the CPU contact surface is nickel-plated and sanded with a fine grit. Manufacturing quality is excellent, also typical of Noctua's offerings. It'd be hard to not be impressed by this thermal solution.

Noctua includes a 9.2cm low-profile fan, which bears the company's familiar colors. The fan's corners are adorned with rubber pads designed to help isolate vibrations. Rotational speed ranges from zero (if the PWM signal sets a speed that's too low) to 2540 RPM. Although the fan is one of the quietest in our round-up, we did pick up on a faint grinding sound at 1000 RPM. Once the NH-L9i is up and running inside of a case, however, the noise is completely inaudible.

You're able to modify the default configuration in a couple of different ways. Using an enclosed adapter (Noctua NA-RC7), the maximum fan speed can be limited to 1800 RPM. Or, mount a 1”-thick 9.2cm fan on the heat sink by means of spare screws that also come bundled.

There’s not much to say, and we mean that in a positive way. Thanks to the factory-installed mounting brackets, all you need to do is to put the heat sink on the CPU and attach it from the back of the motherboard with four screws.

The screw heads are coated with plastic to avoid short circuits, and large enough that you might not even need a screwdriver.

Given a relatively small array of fins, the NH-L9i should fit on most (if not all) motherboards. In the shot above, you can see that it doesn't even overhang our test platform's DIMM slots.

Noctua's NH-L9i is among the shortest coolers we've tested lately. It achieves acceptable, but not outstanding, temperatures. However, we've seen it fare better elsewhere, so we're trying to get our hands on a second sample to see if there might have been an issue with ours. The company's manufacturing quality is notoriously excellent.

You get thoughtful extras like rubber inlays on the fan, a RPM-reducing cable adapter, and extra screws for mounting a thicker fan. But the factory-installed low-profile fan is already one of the quietest we've ever encountered in this space. And since its speed can be throttled, you're all but guaranteed a pleasant experience. The NH-L9i's price tag of $40 isn't cheap, but it appears justified for a solid heat sink with good looks. Due to its small size, expect that the NH-L9i should fit in a majority of build situations.