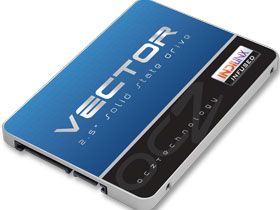 OCZ has seen its share of the spotlight recently, and probably not for the reasons it'd choose, if given the choice. Much of that had to do with upper management tumult, of course, but the company also recently reported financial shortcomings attributed to NAND flash shortages. Grumblings from the competition suggest that the tremendous drops we've seen in SSD prices are a direct result of OCZ's attempts to ramp up sales, even at the expense of margins. Naturally, everyone else has to follow suit.

With so much drama in the LBC, it's kinda hard being a company selling SSDs.

But that's not why we're here today. Even if OCZ has encountered its share of controversy in the past, the company remains on a path toward vertical integration. Rather than simply buying a third-party controller, some other vendor's NAND, slapping on a canned firmware, and calling the resulting SSD its own, OCZ realized a long time ago that the only way to stand apart would be to control as many of those ingredients as possible.

Up until now, we've tested OCZ drives with exclusive (for a while) firmware and exclusive (for a while) controllers. But eventually, its suppliers had to start offering those products to other SSD vendors, too. For a while there, we were led to believe that the Everest 2 controller in its Vertex 4 drives was home-grown, only to learn that it centered on Marvell's technology. What OCZ did achieve, however, was significant firmware customization that led to a compelling performance story. With its version 1.5 release, OCZ changed the Vertex 4's behavior in a significant way, flaunting the talent of its software team and demonstrating maturity beyond what all of the me-too drives out there could claim.

Controller Independence: For Sure This Time?

Today, OCZ is launching its Vector SSD, based on a brand new Barefoot 3 controller. Unlike the Vertex 4's Everest 2 logic, which was clearly branded as an Indilinx IDX400M00-BC, and at least made to look like an in-house design, we're assured that Barefoot 3 (IDX500M00-BC) is, in fact, OCZ's own, a product of its Indilinx and PLX acquisitions.

With that revelation, the company now controls two of the three ingredients that go into creating an SSD. We're sure it'd love an inside line on NAND production as well, addressing the problem cited in its most recent revenue warning. But, as enthusiasts, we know OCZ is in the best position to be disruptive with its own controller. No longer does the company have to put resources into a product launch, knowing full well its competition is right behind with the same logic, a similar software stack, and memory procured from the same sources.

OCZ is being surprisingly open about the composition of its latest effort. The Barefoot 3's internals consist of a single ARM Cortex core alongside a proprietary Aragon co-processor. The first is responsible for negotiating instructions from the SATA controller, while the second manages the flow of data to and from the NAND. Company representatives aren't willing to comment on speed or architecture of the licensed ARM component, but there's a lot more information already public about Aragon.

According to a July 10, 2012 earnings call by then-CEO Ryan Peterson:

The Barefoot 3 controller utilizes our internally-designed Aragon 400 MHz, 32-bit processor, which, for Barefoot 3, was implemented in TSMC's 65-nanometer GP process.The Aragon core is the world's first SSD-optimized processor, and supports an SSD-specific RISC instruction set, allowing most instructions and branches to be executed in a single cycle

We’ve confirmed with OCZ that these details remain the same for its Vector launch.

So, this new drive has an Indilinx-designed controller and, naturally, unique firmware. It's still at the mercy of its NAND suppliers, though. Rather than utilizing the 20 nm flash from IMFT or the 21 nm Toggle-mode 2.0 NAND found in Samsung's 840 Pro, the Vector employs now-familiar 25 nm ONFi 2.x-compatible memory from IMFT.