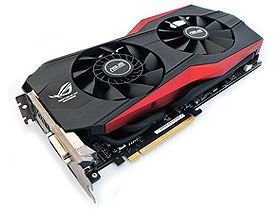 Asus makes a lot of claims regarding the Matrix's DirectCU II cooler. But how does it perform?

Of course, nobody cares about low temperatures if it takes a howling fan to get there...

In order to narrow our focus on graphics card acoustics, we stop all system fans during our measurement. The noise level is sampled two inches from the card's I/O bracket. Our chart starts at 30dB, which is roughly what we consider to be completely silent in a home setting.

The Matrix Platinum bests Nvidia's reference cooler by half a decibel under load, which doesn't necessarily seem impressive until you remember that Asus' card dissipates a lot more heat.

Its clear that Asus' thermal solution is effective. We're also curious to see how much power the card uses compared to the reference design, though.

Surprisingly, the comparison is fairly close.