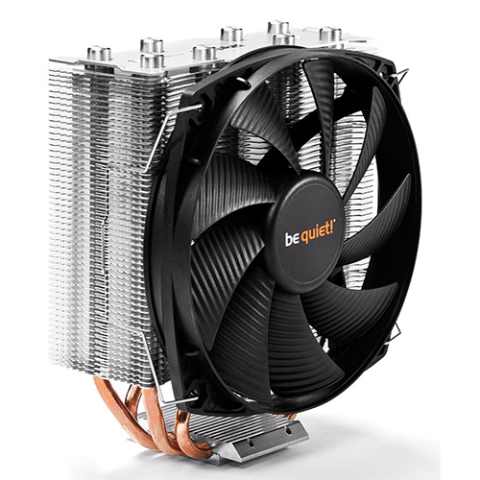 We retain the hardware configuration from previous cpu cooler reviews to make all of our results comparable. The Shadow Rock Slim competes directly against Noctua’s similarly-sized NH-U12S, while its use of an oversize fan required the inclusion of Noctua’s oversized NH-U14S for perspective. Two dual-tower coolers provide even more perspective by showing how much cooling we must give up in order to gain the single-tower conveniences of less crowding and less weight.

The Shadow Rock Slim takes a slight lead in both CPU and voltage regulator (PWM) temperatures compared to the NH-U12S, but that could be completely due to its oversize fan. The NH-U14S also employs an oversize heat sink to reduce CPU temperatures, though the broader fin placement appears to direct some of its extra airflow away from the voltage regulator when compared to the Shadow Rock Slim.

The NH-U12S spins faster at 100 percent duty cycle and slower at 50 percent duty-cycle than either the Shadow Rock Slim or NH-U14S. A larger motor to fan blade ratio is the most likely cause for this discrepancy.

The Shadow Rock Slim has the lowest SPL of any cooler ever tested on this platform, but the NH-U12S isn't far behind.

The "relative average" used to gauge acoustic efficiency is the average of all coolers in this test. Better temperatures and noise levels give the Shadow Rock Slim a slight advantage at full-speed over the NH-U12S, and again it appears that this is mostly due to its slightly oversized fan. Buyers with the space and budget for the NH-U14S will get its "bigger is better" advantage.

The Shadow Rock Slim might not quite reach the performance level of the NH-U14S, but the 50 percent price difference is even harder to minimize. Undercutting even the NH-U12S by $17, Shadow Rock Slim buyers receive huge value dividends.

Excellent performance value is found in the Shadow Rock Slim, but its three-year warranty is only half as long as that of its closest competitor. If the fan fails twice as quickly, the price difference and value lead vanishes with that fan's replacement.

One could argue that three years is just about long enough for a system to become so "stale" that an at-home builder will replace it, but we can't forget that those outdated PCs often get handed down to someone else. We can only guess at how long any specific fan will last, but three years of factory support on a reduced-price enthusiast product is certainly worth our stamp of approval.

Prev Page Introduction, Specifications And Features
31 Comments Comment from the forums
Be In the Know