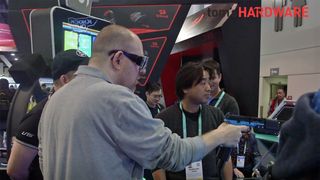 Unis, the arcade game company that brought Atari Pong back to arcades in physical form a couple of years ago, is at it again. At the company's CES 2020 booth, it showed off two new arcade games that combine physical objects with virtual fun: a four-player version of Pong and a shooting game that fires real pellets at the screen.

Much like its two-player predecessors, Atari Pong Knockout features real, magnetic paddles and a puck, which sit under glass and are controlled by dials on the console. As in classic Pong, the goal is to knock the puck past your opponents' goal lines.

However, this version of Pong supports up to four players at a time. Rather than trying to achieve the highest score, the goal of Knockout is be the last player standing. After each player allows three goals, they are eliminated, until only one remains. If there are fewer than four human players, the other paddles will become computer competitors.

I had a lot of fun playing against three human competitors at Unis's booth, but I was one of the first to get eliminated. The feel of the dial and the button you use to serve is great. The all-white look of the paddles and puck makes them look like 3D graphics when they are real objects under glass. After each goal, magnets under the game board make the puck float over to the paddle of the player who is serving next.

Atari Pong Knockout is already rolling out to Dave & Buster's arcades in the United States, so you may find it there even now. It will eventually become available at other arcades and, presumably, for individual purchase, though we doubt many people would have the space or budget for it (no word on pricing, but it's probably several thousand dollars).

At CES, Unis also showed off On Point, a shooting target game that uses a real air pistol to fire very-real pellets at the screen. The goal of the game is to hit as many targets as you can before time runs out.

A Unis representative said that On Point, which is due out later this year, will use 100 pellets per game and be able to hold enough pellets for 400 games, before requiring a refill. Though Unis had me wear safety glasses to play, the entire setup seems pretty idiot-proof. The gun will not fire unless it is pointed directly at the screen, which is behind a barrier so it's hard to imagine someone accidentally shooting themselves or someone else.

Shooting real pellets gives the gun in On Point a very realistic feel with kick back and air shooting noises. While Unis could have used a fake gun that doesn't shoot anything, having this element of realism makes the game a lot more fun.

There's no word yet on when On Point will be coming to arcades or how much it will cost, but the product we saw looked like it was ready for primetime action.