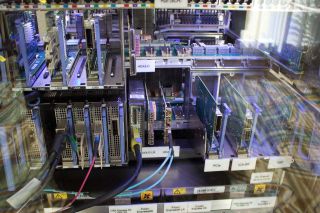 The governor of New Jersey made a seemingly odd call for help last night: The state desperately needs COBOL programmers to revamp the 50-year-old software powering the 40-year-old mainframes behind the state's unemployment system. That may seem surprising on the surface because COBOL debuted back in 1960 and mainframes ceded the leadership position to general-purpose x86 servers decades ago. However, these (sometimes) archaic systems still power much of the infrastructure behind governmental agencies, banks, and airlines.

The need comes as New Jersey struggles to process a staggering 1,600% increase in unemployment claims as the wave of coronavirus-spurred business closures comes crashing to shore. 1980's-era mainframes power new Jersey's unemployment system, so scaling operations up to handle the increased load requires programmers that mostly no longer exist. That presents a unique challenge as the state looks to pay out more than 362,000 unemployment claims filed over the last two weeks, half of which are unpaid, not to mention the continuing onslaught of new applications.

The state will have competition, though; Connecticut is already leading a joint project with three other states to recruit COBOL coders to overhaul its own aging mainframe infrastructure. None of these efforts will find easy success: COBOL is a dead language that hasn't been taught in most universities for decades, and the rare COBOL coders command anywhere from $55 to $85 an hour. As such, New Jersey is looking for volunteers, likely of the retired sort, to help solve its problems.

For many, the mention of a mainframe system conjures up mental images that hearken back to the old full-room systems of a bygone computing era. In reality, mainframes continue to be deployed around the world and process billions of transactions per day. IBM's z Systems revenue, for example, actually grew by 62% percent last year, but those systems are decidedly more modernized than the relics running New Jersey's unemployment system.

Today's mainframes are sophisticated affairs that share little with their predecessors beyond the architectural vision, and they support the major Linux distributions, runtimes, development languages, and management tools, meaning you can use decidedly more modern code.

Why stick with Mainframes? The systems are basically unhackable (there simply aren't many COBOL hackers out there) and they also offer the ultimate in reliability, as evidenced by their 40-year run in New Jersey. They offer up to 99.999 percent availability and intense scalability on one of the world's most open platforms, but price has traditionally been a sticking point. However, IBM claims that today's new systems are decidedly less expensive than renting instances on the public cloud.

New Jersey, along with many other state agencies that have had infrastructure weaknesses exposed amid the massive shift spurred by COVID-19, are mainly in damage control at the moment. We can expect these difficulties to spur a wave of sorely needed upgrades across government agencies soon, leading to decisions on whether to adopt modernized mainframes or merely go with x86 servers or the public cloud.

Editor’s Note: This article was first published listing the mainframes as 50 years old, but they have been in service for 40 years. The software was written in the 1970s, which puts it at the 50-year-old mark. The text has been amended.