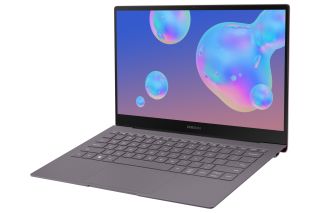 Samsung announced today that the Galaxy Book S will be available with Intel Lakefield processors. The company has yet to release U.S. pricing and release dates, though the company's UK site has it shipping on June 12 for £999.00.

Update, May 29, 2:07 p.m. ET: Samsung told Tom's Hardware that this announcement is for the Korean market and that US details are unavailable. Story continues below.

The laptop will use an Intel Core i5-L16G7 CPU, which boasts Intel UHD graphics, Foveros 3D stacking technology for the first time and a hybrid CPU architecture.

Besides its first-of-its-kind processor, the Galaxy Book S will arrive with 8GB of LPDDR4X RAM and up to 512GB of eUFS storage. It will also come with Wi-Fi 6 and LTE options for connectivity.

The upcoming clamshell is light at 2.1 pounds and is just 0.5 inches thick. Samsung will offer the design in two colors: earthy gold and mercury gray.

The Galaxy Book S debuted with a Qualcomm Snapdragon 8cx, but this will be the first time we see Intel's five-core hybrid processor, which pairs one Sunny Cove core with four Tremont cores using Intel's 3D Foveros technology. Samsung's specification states that the Core i5-L16G7 offers clock speeds of up to 3 GHz and an L3 cache of 4MB.

We first saw Lakefield at CES inside the Lenovo ThinkPad X1 Fold, though Lenovo was careful not to name the chip specifically, only saying that it uses Intel Hybrid technology. Microsoft also suggested it would use Lakefield in the now-delayed, dual-screened, Surface Neo. So instead, Samsung got first dibs (though Lenovo plans to release the Fold this year). This laptop leaked earlier on a Canadian version of Samsung's website.

Using an x86 chip over an Arm chip in the Galaxy Book S means Samsung's machine will support all Windows apps. If Samsung opted for an Arm chip and Windows 10 on Arm,  32-bit x86 apps would have to be emulated, and 64-bit apps wouldn't run at all. Some Windows programs have been compiled for Arm, but they're not all there yet. The Lakefield version of the Book S should offer far fewer limitations in that regard.

What is unclear until we test it is how the two will compare in terms of performance and battery life. But we hope to see this sleek laptop land in our lab soon.