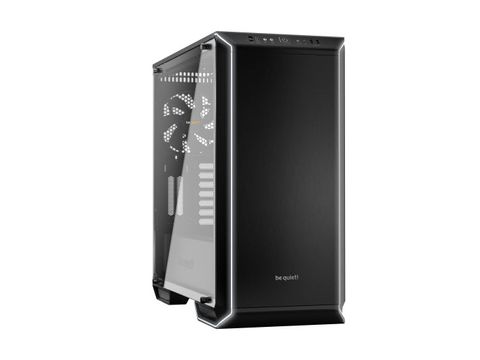 [Note: This is a different test platform from the one used in our other ATX case reviews, so we re-tested the BitFenix Nova to keep the comparison fair. This is indicated by the "test #2." Readers who are good with numbers should be able to make comparisons between the cases tested here and those tested at our other lab.]

Having panels lined with sound deadening material coupled with a tempered glass side panel results in a system that is near silent with the fans running at 1,000 RPM and just barely audible with the system under full load and fans running at 1,600 RPM. In fact, when compared to the other cases, this chassis provided the lowest noise output at just 32.1dBA under full load. It should be noted that the fan controller is set to “silence mode” out of the box, which limits fan speed to just 1,000 RPM. Selecting “performance mode” boosts fan speed to 1,600 RPM.

Cooling efficiency and noise levels are both ways to measure performance. Determining acoustic efficiency, also referred to as cooling-to-noise ratio, is a matter of averaging all five of our tests to determine a base value.

Our value chart doesn’t take features into account. We can probably all agree that the $180 asking price seems high, until you take the overall performance and customization options into account. Although we'd have liked the company to throw in another fan at this price point. The ability to swap your case from one side to other other will be worth the asking price to many enthusiasts and system builders, and the performance speaks for itself.