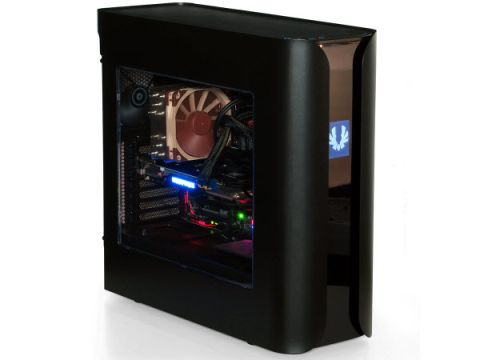 Fitted with a unique configurable logo panel, the Pandora ATX’s value rises from mediocre to above-average for builders who need space for two large radiators.

Front panel displays have been a high-priced case feature for many years before other gimmicks like RGB lighting came along, so imagine our surprise when BitFenix decided to incorporate one into its mainstream Pandora ATX.

Unlike the high-priced version of early high-end cases, this display appears limited to simple logos, although users are able to load their own over its USB 2.0 interface. It can take a few seconds to change, so we’re pretty certain this part isn’t software upgradeable to act as a system status display. Still, the ability to add your own lighted logo in place of the factory version is a solid nod towards personalization.

Priced between $140 and $160 with various merchants, the rest of the Pandora ATX appears similar to its mainstream competitors. Curved forward edges on the side panels add some distinction, but these are still made of thin steel sheet. At least BitFenix rolls the edges nicely.

Buyers get the expected assortment of twin USB 3.0 and twin USB 2.0 ports at the front edge of the top panel, along with headphone and microphone jacks. A lighted power button and reset button with HDD activity LED frame the port section.

Out back we find only seven slots, which is always a little disappointing in a gaming case, because some motherboards have a graphics slot at the bottom. Eight is enough when builders want to use that slot. Other features include a pair of grommets for external liquid cooling lines, a 120mm fan, and a steel sheet handle.

A power supply intake filter slides out from under the back of the Pandora ATX bottom panel.

Side panels are attached with screws at the back edge and snap-in pegs near the front edge. Pulling the panel off the front pegs first makes it easier to get the screws past the edge of the rear panel.

You’ll find a multi-pattern padded pump mount, a 3.5” drive tray and two 2.5” trays within the Pandora ATX motherboard compartment. A raised section of the motherboard tray that appears to limit the unit to ATX motherboards is shallow enough to clear the circuits of most oversized boards (offering about 3/16” of clearance), although BitFenix doesn’t recommend this.

Two more 2.5” trays are found on the back of the motherboard tray, and the power supply tunnel has three more 3.5” trays. We found that one of these trays was too far back to fit with our power supply installed, so we left it out.

All of the 3.5” trays are capable of securing a 2.5” drive, leaving builders to choose between up to eight SSDs, four HDDs and four SSDs, or some other combination with a maximum of four 3.5” drives. Reduce that number by one 3.5” tray when the build includes a long power supply.

Building Inside The Pandora ATX

The front intake filter amazingly slides out of the bottom of the front panel, and doing this exposes mounts for both 3x 120mm and 2x 140mm fan configurations. A single 140mm fan is included.

Beneath the removable panel is 2.5” of space for 3x 120mm and 2x 140mm radiator/fan combinations, plus a bracket for hanging additional cooling hardware such as reservoirs.

The installation kit includes rubber grommets and shoulder bolts for mounting up to four 3.5” drives, M3 screws for SSD installation, motherboard screws with additional standoffs, two types of power supply screws, a case badge, zip ties, and a second handle that can be affixed to the bottom edge of the rear panel if desired.

The Pandora ATX has two USB 2.0 cables, one for ports and one for the front-panel digital logo display. HD-Audio replaces the long-outdated AC-97 headset header, USB 3.0 feeds two ports, and the Power LED connector is split to fit both standard and Asus pin spacing.

Our SSD is going on the rear of the motherboard tray.

Our ATX motherboard fits easily, while our oversized motherboard officially doesn’t. I’d be willing to chance putting the larger board in this case, although I still find it a shame that this is among the many enthusiast-class cases lacking the extra 1” of obstruction-free clearance needed for the plethora of XL-ATX-depth boards that have been mislabeled EATX. Manufacturers should know by now that we’ll keep our readers informed of motherboard form-factor deviations.

In other words, a case designer need not “give up” adding the extra clearance simply because they can’t reach the full 13” of EATX depth. We’ll make sure you know that an ATX-labeled case with 11” of clearance supports an EATX-labeled 10.7”-deep motherboard.