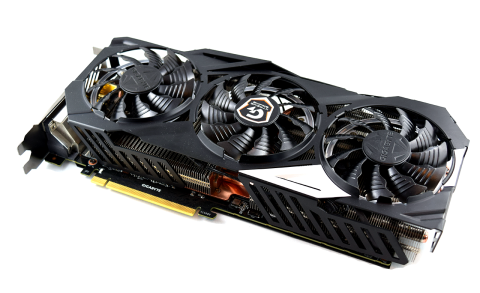 To unlock the full potential of Gigabyte's graphics cards, the company supplies its own overclocking utility called OC Guru II. This software allows for adjustment to a number of the graphics card's parameters.

For instance, the GPU core clock can be adjusted in 1MHz increments. Same goes for the memory frequency. Target Power and Target Temp can also be adjusted in a granular manner. The power maxes out at 130 percent, and the temperature can be set as high as 91 degrees Celsius. Core Voltage is adjustable in 0.0125V increments.

OC Guru II is also used to manage the card's fan profile. By default, the fans switch off any time the GPU temperature falls below 60 degrees. Choosing a manual profile lets you keep the fans running all of the time to bring temps down even further.

Gigabyte's GeForce GTX 980 Ti Xtreme Gaming includes a set of RGB LED fan lights and an illuminated WindForce logo, controlled through OC Guru II. The lights have seven preset colors, and the software includes a mode to cycle between all of them. There is also an option to select any color you wish with a slider bar. In addition to picking a color, you can choose between static, breathing, flashing and a dual-flashing behavior.

Gigabyte's GTX 980 Ti Xtreme Gaming is already aggressively overclocked from the factory. But the company wouldn't have binned its GPUs, engineered a custom PCA, installed an oversized cooler and developed a LN2-specific firmware if it didn't expect enthusiasts to push the hardware even further. There's even a special overclock setting to increase the core clock another 25MHz.

That became our starting point for manual tuning. Before embarking on our own overclocking journey, we ran a baseline in 3DMark. From there, we increased the core clock another 25MHz and maxed out the power limit.

We increased the GPU clock rate in 5MHz intervals up to 1276MHz, at which point the system encountered a lock-up during the second test in 3DMark. Ultimately, 1266MHz proved to be the highest stable GPU frequency.

After locking in an optimal GPU overclock, we shifted attention to the memory. Gigabyte configures its GDDR5 modules to operate at 7202 MT/s, which is already one of the highest transfer rates we've ever seen. As it turns out, the memory doesn't want to be pushed much harder. Beyond 7222 MT/s, the GTX 980 Ti Xtreme Gaming doesn't make it through 3DMark.

Ultimately, we were able to increase the core clock rate by 40MHz and the memory by 20MHz, though that proved to be of little value in our benchmark suite.

We took two temperature measurements for the Gigabyte GTX 980 Ti Xtreme Gaming card. The automatic fan profile and the default settings when switching to manual were tested as well. As you can see, both profiles demonstrate dramatically different patterns, which interestingly mirror the results of two configurations used for comparison.

These tests were run in one sitting, and the GPU was manually cooled down between them to speed up the process. Several days later, after the GPU had been sitting idle with its fans disabled, we saw the GPU temperature at 58 degrees. If you don't have much airflow in your case, consider a manual profile that keeps the fans spinning.

Gigabyte's GTX 980 Ti Extreme Gaming may share a similar temperature profile as EVGA's GTX 970 SC, but it certainly doesn't output the same sound levels. This is truly one of the quietest cards in our lab. Sapphire's Tri-X cooler manages a slightly lower ceiling, but at 38.5 decibels the Gigabyte card is still very quiet.

The automatic profile shuts the fans off completely at idle, resulting in silent operation. After about 10 minutes of game play, the fans spin up to audible levels. But in a room with other ambient noise, you're not going to hear them.

Nvidia's Maxwell architecture is famous for its efficiency, delivering incredible performance per watt of power consumption. Gigabyte's take on the flagship results in one of the fastest single-GPU boards you can buy, so it's no surprise that this card uses more power than its lower-end competition.

It was somewhat surprising to see just how much power the card uses at idle, though. Drawing 26.2W puts it in the same range as PowerColor’s overclocked R9 390X, a card well-known for posting big consumption figures. Under full load, the GeForce GTX 980 Ti Xtreme Gaming draws practically the same amount of power as Sapphire's R9 Fury Tri-X. Still, two GTX 970s in SLI and the VisionTek R9 295X2 show that this single-GPU card is far more efficient than two processors working cooperatively.