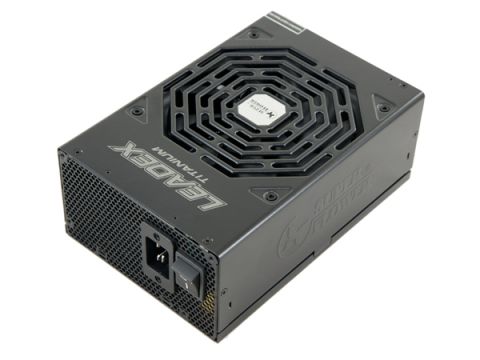 The PSU uses a modified version of the EVGA 1600 P2, which we previously reviewed. This is a modern design featuring a bridgeless APFC converter, along with a full bridge topology and an LLC resonant converter for improved efficiency. In the secondary side, only MOSFETs (metal-oxide-semiconductor field-effect transistors) are used for the regulation of the +12V rail, while two DC-DC converters or voltage-regulation modules (VRMs) handle the minor rails.

A small PCB hosts the AC receptacle and the on/off switch. All parts of the EMI/transient filter are installed on the main PCB, including three pairs of Y caps, a pair of X caps, an MOV and two CM chokes.

The single US30K80R bridge rectifier is probably only used by the 5VSB rail, since the main rectification takes place in the APFC converter.

In the APFC converter, eight FETs fully rectify the AC mains voltage and, at the same time, shape the current waveform to match the voltage. This helps to bring the power factor closer to unity by restricting the flow of reactive or apparent power back to the source. In addition to the above FETs, we found four Infineon IDL10G65C5 boost diodes. The bulk caps are four parallel Nippon Chemi-Cons (400V, 390uF each, or 1560uF combined, 105 °C, KMW).

The PFC controller is an SF29603 IC, for which there is no documentation available. It is installed on the shielded PCB, located in the APFC converter's area.

A pretty large negative temperature coefficient (NTC) thermistor provides protection against large inrush currents that occur during the PSU's start-up phase. An electromagnetic relay isolates the thermistor once the APFC capacitors are fully charged, allowing it to cool down while providing a small efficiency boost, as this NTC has some resistance even at high operating temperatures.

We removed one of the APFC's capacitors to provide you with a better view of the main switchers. The four Infineon IPP50R140CP main switchers are arranged into a full bridge topology, which is ideal for high power outputs. At the same time, it is able to provide good efficiency levels. An LLC resonant converter is also used for a significant efficiency boost.

To restrict energy loss—and because there was no space for a single large main transformer—Super Flower uses two smaller parallel transformers. Between the main transformers and the modular PCB are many electrolytic capacitors rated at 105 °C (KY series), along with some polymer caps. All of them are provided by Nippon Chemi-Con, so the caps are of high quality.

We found that all FETs rectify the +12V rail on four vertical daughterboards. Twelve Infineon BSC027N04LS MOSFETs are used for this purpose—fewer than the 16 BSC035N04LS that are used in the Platinum version of this platform. The first type of FETs (model number BSC027N04LS) have a smaller RDS (on) value, which leads to significantly lower power losses, especially as the load increases.

We applied lots of glue at the PCB that holds the fan header while trying to remove the fan from the PSU. Super Flower should look into this matter closely and either attach the fan header directly onto the main PCB or reinforce the base of the PCB. On the daughterboard that houses the fan control circuit, an LM324ADG operational amplifier (op-amp) is installed, and a little farther up there is a Mospec S10C60C SBR, which generates the 5VSB rail.

The standby PWM controller is an IC with the number 29604 written on it—a clue that didn't help us find any information about it.

The resonant controller is the AA9013 IC, which is used by all Leadex platforms. There is also an LM324ADG op-amp on the same PCB that hosts this controller.

Two DC-DC converters generate the minor rails. Both of them use Chemi-Con polymer caps.

On the front of the modular PCB, we found lots of sockets as well as a multitude of polymer and electrolytic caps, which provide some extra ripple filtering; all of these caps are also manufactured by Chemi-Con.

In general, the soldering quality is good, although we noticed some minor issues with it. The finish of the PCB could be better in some spots as well. We also believe it would be better if Super Flower used a thicker PCB featuring more layers.

Prev Page Packaging, Contents, Exterior And Cabling Next Page Load Regulation, Hold-Up Time And Inrush Current
18 Comments Comment from the forums
Be In the Know