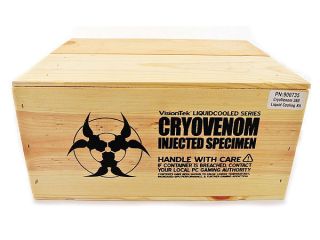 [Oct 13/2014 addendum: Visiontek has lowered pricing across its liquid-cooled graphics card line in response to feedback from this article, and the CryoVenom R9 295X2 kits have dropped a whopping $300. We have reflected this change in our writeup below. You can check the Visiontek website for specific details.]

Liquid cooling is one of the most practical thermal management solutions that a PC enthusiast can install, and it enables some interesting hardware configurations. For example, AMD realized that air cooling wasn't potent enough to handle its power-hungry Radeon R9 295X2, so the company chose to equip the board with an Asetek-supplied closed-loop liquid cooler. This enables a dual-slot solution that keeps GPU temperatures and noise relatively low. As a result, the Radeon R9 295X2 isn't difficult to live with, unlike some of its dual-GPU air-cooled predecessors.

Just because AMD's reference cooler is decent, however, doesn't mean that it's the best you can get. Open-loop implementations facilitate flexibility when it comes to installation, expansion, and performance. Of course, removing the factory cooler to replace it with a third-party solution voids your warranty, so there's a compromise to make.

If you're not a fan of give and take, VisionTek has a solution: the CryoVenom Radeon R9 295X2, a single-slot version of AMD's powerful flagship, outfitted with an open-loop cooling block and covered by a one-year factory warranty.

Again, this is a single-slot graphics card, unlike the dual-slot reference Radeon R9 295X2. That provides more space if you're planning a dual-card CrossFire configuration, and two CryoVenom cards could theoretically share the same loop. On the other hand, two reference 295X2s require the installation of two separate radiators and the attached generic-length hoses. In some PC enclosures, it's just not an option.

Not that I'm advocating the use of two Radeon R9 295X2 cards in CrossFire. But an open-loop liquid cooling system does provide more flexibility. Once you have the system in place, it's relatively easy to expand by linking in a second graphics card, a CPU or a chipset block. It's a highly customizable system.

With this flexibility in mind, VisionTek offers a number of different purchase options for its CryoVenom cards. If you already have your own open-loop cooler, you can purchase the card alone for $1450. If you need everything to get you started (including a reservoir, pump, radiator, fans and hardware), you can pick up the Radeon R9 295X2 plus 240 liquid cooling kit (240 indicates a radiator that fits two 120mm fans) for $1700. If you want something even more powerful, an extra $50 gets you the 360 liquid cooling kit with a radiator large enough to accommodate three 120mm fans.

We wanted to see what VisionTek's highest-performance option can accomplish, so we tried its CryoVenom R9 295X2 + 360 liquid cooling kit. As you can see in the picture above, this includes all of the equipment you need to get up and running: the card, the pump with integrated reservoir, cooling fans, about six feet of tubing, coolant and hardware. There's even a t-shirt included in the serious-looking pine box.

Of course, that box isn't big enough to hold everything, so the triple-120mm radiator comes in a second package. Note the EKWB logo on the box. VisionTek is partnering with this highly regarded company to supply the CryoVenom's liquid-cooling components. The radiator is actually EKWB's CoolStream PE 360 Triple, about 40mm thick with copper fins, 90% copper tubing, brass chambers and an aluminum housing. Each of the three fans is rated at 58.8CFM and spins at 1600RPM.

The pump and reservoir are combined in a single, attractive unit that sits in a 5.25" drive bay, allowing you to monitor the liquid level. This appears to be an EK-SBAY with an EK-DCC 3.2 PWM pump, specially branded for VisionTek's CryoVenom series. The maximum head pressure is rated at 5.2m. It's backlit, so colored coolant adds some extra bling, too.

That's a reference Radeon R9 295X2 PCB under the cooling block, with AMD's standard DVI connector and four mini-DisplayPort outputs. But while the reference liquid cooler only draws heat from the Hawaii GPUs, EKWB's cooling block is applied to the GPUs, memory and voltage regulator modules (VRMs). Keep in mind that we have previously shown that those VRMs can reach over 105 degrees Celsius under load, so the CryoVenom's ability to cool them represents a substantial advantage over the reference card.

The CryoVenom R9 295X2 has a sturdy metal backplate to maintain structural integrity. Even without coolant, VisionTek's card weighs a substantial 1.564 kilograms.