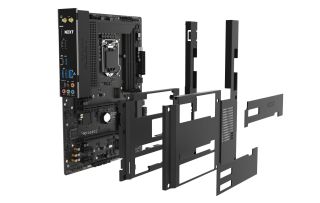 If you're a big fan of NZXT's cases and cooling gear, you might be happy to hear that NZXT also has a Z490 motherboard in the works. The information comes courtesy of hardware detective @momomo_us, who linked to a pair of imgur albums with images of NZXT's take on Z490 motherboards, meant for use with Intel's new Comet Lake-S processors.

From the looks of it, the board will come in black and white flavors, each identical but simply with different color covers. Both come lathered up entirely with covers, leaving very little of the electronics visible underneath. But, this makes for a very clean appearance, which we can imagine would work quite well when paired with one of NZXT's cases.

A spec sheet was also uploaded, which shows that the boards come with everything you'll need, including the standard RGB headers, as well as a USB Type-C header, and all the fan and pump headers you'll ever need, making the Z490 board from NZXT quite a complete package. Realtek 2.5 Gbit Ethernet is included too, as well as WiFi 6.

It's worth noting that NZXT builds its CAM ecosystem into its motherboards, meaning you won't need the external controller to control all your NZXT bits and pieces in your system.

The boards support Comet Lake-S processors via the LGA1200 socket, and up to 128 GB of DDR4 memory at speeds of up to 4133 MHz. No PCI-Express 4.0 support is quoted on the spec sheet for the upcoming Rocket Lake chips, so you'll have to make do with PCI-Express 3.0. If you're using one GPU, you'll get 16 lanes of it on the main slot, or in the case of a dual-GPU setup, they'll each have access to eight lanes.

No word on pricing yet, but the last version was listed at a retail price of $275, with street pricing often $25-50 lower than that. We'll have to see in due time whether NZXT will also be making custom covers for the board, like this Nuka-Cola one for themed builds.