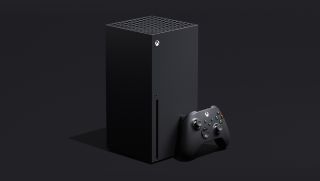 In a surprise announcement at The Game Awards last night, Microsoft unveiled that its next console will be called the Xbox Series X. Additionally, it unveiled a new design and a controller. It will release in time for the holidays in 2020.

From a teaser video, the design looks like a small form factor tower, similar to the Corsair One desktop. There's ventilation on the top (with what appears to be green lighting) and a disk drive on the front. In Microsoft's official announcement, it's said that the box can be placed either horizontally or vertically.

The controller is almost identical, though there is now a share button and a d-pad resembling the one from the Xbox Elite Series 2 controller. The shape has changed ever so slightly, which Microsoft claims will be comfortable for more people, but the controller is otherwise largely the same. It will work with Xbox One, Windows 10 PCs and, of course, be included with the Series X.

On the technical side, Xbox head Phil Spencer wrote that the system, powered by an AMD Zen 2-based processor and a  "next generation RDNA architecture" with hardware accelerated ray tracing. Microsoft is claiming it will play games in 4K at 60 fps "with a possibility of up to 120 fps" and offer both Variable Refresh Rate and "8K capability."

In an interview with Gamespot, Spencer said that "when we do the math, we’re over eight times the GPU power of the Xbox One, and two times what an Xbox One X is." The Xbox One X pushes six teraflops of performance out of the GPU, so by that math, the Xbox Series X could potentially push 12 teraflops.

Unsurprisingly, Microsoft, which is working on its Project xCloud streaming, is also suggesting that the Series X will have unique ways to bring games with  you elsewhere.

Finally, there is a promise of Xbox One Series X being backwards compatible across every Xbox, every Xbox One accessory, and, of course, Xbox Game Pass.

Halo Infinite is set to be among the first party offerings that launch with the system. At the Game Awards, Microsoft showed video from Senua's Saga: Hellblade II.

So far, this is being discussed as a single console. There are reports and rumors, however, of two options: a more powerful version (code-named Anaconda) and a more affordable option (Lockhart). Microsoft has not confirmed this, but the "Series" name suggests there could be multiple consoles within a lineup.