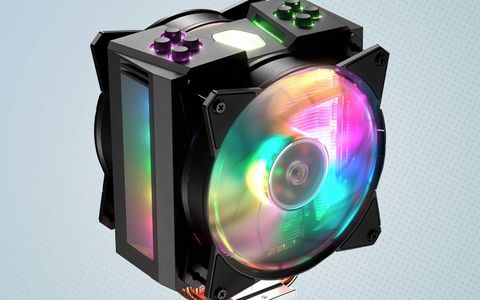 Collecting data from every cooler we test provides us with a pool of content with which to compare cooler result.  Our Intel Core i7-5930K clocks in a 4.2Ghz at 1.20v and provides plenty of thermal load across all six cores atop our MSI X99S XPower AC motherboard, which also cradles 16GB of DDR4-2400 Crucial Ballistix Sport memory.  Keeping it all safe and secure is our Corsair Graphite 760T chassis.

Both MasterAir MA410M coolers showed almost identical thermal load numbers, which is to be expected. Both also outperformed the larger, MA620P TUF Edition. The Dark Rock 4 turned out the lowest core temperatures of the group by a little over 1 degree Celsius.

These results aren’t surprising since Cooler Master used the same fan specs for the three MasterAir fans, while the Dark Rock 4 ran a bit slower due to the larger 135mm diameter fan.

Noise levels of both MA410M models were fairly similar, but what is rather interesting is the same fans used on the MA620P posted lower registered decibel levels.  As expected, the lower-RPM Dark Rock 4 fan was ninja-quiet and snook away with the noise level award here.

While the louder fans kept the MA410M a bit down on performance value, it’s the overall average price that caused the Dark Rock 4 to take a drop since it comes at a premium-tier cooler price. With the Cooler Master offerings available at $60 each, they all have nearly identical baselines to work from, making their comparisons more apparent.

Thermal imaging from our FLIR ONE Pro shows moderate cooling tower heat soak at 50 percent fan speeds, but almost none at full speed. Meanwhile, the latter produces a plume of warm air dissipating outward from the rear of the cooler, as well as some side venting. There are some minimal heat map differences in nearby components, such as the motherboard and memory DIMMs, but little to be concerned about.

Overall, Cooler Master has a solid-performing ,mid-size heatpipe cooler with the MasterAir MA410M and one that performs so well that it really negates reasoning for the larger MasterAir MA620P TUF Gaming Edition. Considering that the MA410M and the MA620P are available at the same price, the difference in cooling performance is enough to ask why you’d select the larger, harder-to-install, lower-performing MA620P over the bruising capabilities the MA410M provides. Even if the argument is around difference in noise levels, a good PWM fan curve can effectively neutralize that perspective when it comes to real-world use.

The Cooler Master MasterAir MA410M is our pick for an excellent performing mid-size air cooler, especially considering the aggressively designed exterior shell and the inclusion of addressable RGB lighting from within the cooling tower itself.  Sitting on the upper range of the affordable pricing tier, $60 might cause budget system builders to balk a bit, but considering the features and performance, it definitely deserves those few extra dollars.