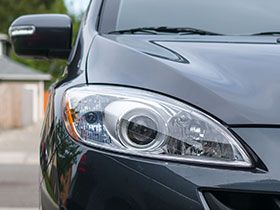 How Is The Project Car Holding Up?

Since last summer's 2014 Mazda5 Sport: Say Hello to Tom’s Hardware’s Project Car, we've been hard at work installing more upgrades and add-ons. The vehicle has about 9000 miles on its odometer and just went in for its second oil change. Before we start on what’s new, I'd like to revisit the first round of upgrades to provide an update on how the aftermarket work is holding up.

Those projects included an integrated Qi wireless charger, a back-up camera, a dash cam, an in-car iPad 2 and LED headlights. The Adata CE700 I dismantled to build into the car is still working well, and it continues to charge my Nexus 5. I had a brief affair with Nokia's Lumia 1520 that resulted in being unable to use integrated charger for three months, but I'm back to using the Nexus 5 again.

Anyone interested in the Qi charger but reluctant to go the custom route should check out Brandmotion's FreedomCharge Qi wireless charger. The company offers direct fit kits for the Toyota Camry, Ford Fusion and Ram trucks. There’s even a custom trim-to-fit package that includes the inductor coil, rubber mat, power harness and mounting screws. Brandmotion lists offering for $170, which is pricier than my more custom route, but it gives you everything you need in one package. Since the kit is offered to installers, you can always pay a car stereo shop to do the work if you'd rather not.

Our back-up camera installation is having issues that need to be addressed. The Audiovox ACA300 wireless transmitter and receiver run into problems with interference. Scan lines popped in and out after the original installation, but now the image drops out every couple of seconds. It's simply not reliable enough for this application. I plan on running a composite cable from the front of the car to the back as a solution. As much as I wanted the wireless transmitter to work for simplicity's sake, a hardwired cable is the right way to go.

The Papago GoSafe Wi-Fi is holding up well. I've noticed that the bright blue power LED is obnoxious to passengers, but it doesn't bother me in the driver's seat. I still haven't recorded anything interesting with the dash cam, except for terrible Washington drivers failing to stay in their lane when it starts raining (Ed.: That's not just Washington, Tuan. Try SoCal.).

Rear seat entertainment provided by the iPad 2 is great for our long drives. The Scosche backSTAGE pro II mount's IR headphone support keeps my oldest kid entertained, saving me from listening to Frozen for the billionth time. I did hard-wire the iPad mount into the car. Because I didn't want to do irreversible damage to the bundled power adapter, I simply tapped the cigarette lighter for a second 12V plug inside the console.

Current page: How Is The Project Car Holding Up?

Next Page Update: LED Headlights
16 Comments Comment from the forums
Be In the Know