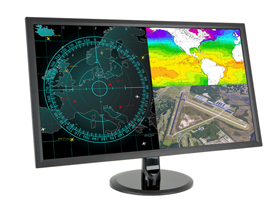 The IX2850 has an internal power supply, so all you need is the enclosed IEC cable to plug in. Also in the bundle are HDMI, DisplayPort (v1.2-rated) and USB 3.0 cables. A small, round base snaps on to the already-installed upright and, lo and behold, there’s a printed user manual!

From the front, the IX2850 looks like most other desktop monitors with a thin bezel framing the screen. Planar doesn't repeat its flush-front styling from the PXL2790MW. At only 19mm, it makes a good choice for multi-screen setups. The control buttons are hidden below the bottom-right edge and must be operated by feel. They are raised to make this easier. Small icons are printed on the front, but they’re hard to see unless the monitor is showing a dark image. A status light glows orange during standby and blue in operation.

Another attribute Planar doesn't carry over from its PXL2790MW is the bonded front screen layer. By eliminating the air gap between it and the TFT layer, the image becomes super-clear. The company instead appears to use a more traditional anti-glare coating that does not create any grain or texture in the image. The sharpness is still there, though not at the PXL’s level. Fortunately, it's easier to place the panel because it rejects light well.

The included base and upright only offer 25 degrees of tilt adjustment. There’s no way to change the height or swivel the panel. If you want more movement or a portrait mode, you have to change out the bracket. Planar offers accessory parts for this that can accommodate up to four panels at once.

Planar tapers the panel nicely on the sides and across the back. On the left are two USB 3.0 downstream ports, an analog audio input and a headphone jack (hooray!).

There’s plenty of ventilation around back, and you can even see the speakers in this photo. They fire backwards, so place the panel near a wall for the best sound. You can also see the 100mm VESA mount. You’ll have to use this if you want any panel adjustment or if you want to use one of Planar’s slick multi-monitor brackets.

Here’s the IX2850’s loaded input panel. You get one each of DVI and VGA, along with two DisplayPort and HDMI connectors. You can have up to four connected sources on the screen at once with the FlexFour (PBP) feature. On the far right is the USB 3.0 upstream port. Just above the VGA input you can see the Kensington security lock.