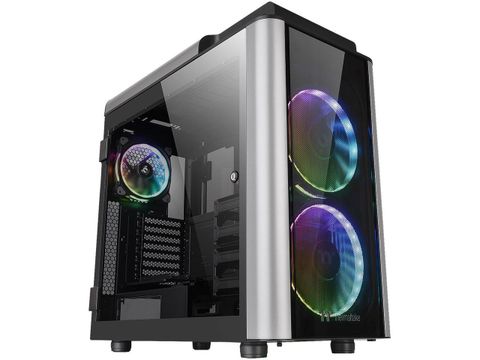 Although the Level 20 GT RGB supports up to EATX motherboards measuring 13 inches deep by 12 inches tall (330 x 305 mm), using motherboards of this size physically blocks off all the cable passthrough holes in the motherboard.

This chassis can be outfitted with CPU coolers up to 200 mm and multi-GPU setups up to 310 mm (410 mm with the hard drive racks removed). The Level 20 GT RGB has a total of eight expansion slots and can accommodate PSUs up to 220 mm in length. The eight expansion slots can be rotated to a vertical orientation. The process is a simple matter of removing 5 screws, rotating the slots 90 degrees and replacing the screws.

For a cleaner look and better airflow, we would remove the drive rack and mount an SSD (OS) and two large spinning disks (storage) in the area behind the motherboard tray.

We tested power supplies up to 220 mm in length without any issues. The case even has a window for the power supply shroud, so you can hide the unsightly cables while still showing off your PSU brand of choice.

You can mount all-in-one liquid coolers and radiators that are up to 360 mm to the front and top of the chassis' main compartment. The front of the chassis can easily support radiators sandwiched between fans in a push-pull configuration as long as the hard drive cage is removed. In fact, the interior of the Level 20 GT RGB is large enough to accomodate a 360mm radiator in the top and front simultaneously.

This chassis is LCS (liquid-cooling) Certified. The certification process, developed by Thermaltake, is exclusive to the company's own products. Simply put, LCS certification is a designation given to water cooling components and cases that pass a set of internal standards that guarantees compatibility. This takes the guesswork out of choosing components for your system build.

The Level 20 GT RGB incorporates Thermaltake's RGB PLUS Ecosystem, an addressable LED lighting system that allows you to adjust colors and synchronize your effects based on games, music, system temperature and more. This also carries over to other Thermaltake RGB PLUS products, waterblocks, case fans, AIO CPU coolers, LED strips, gaming keyboards, headsets and other RGB-lit system components. The software is pretty straightforward and simple to use, though a bit slow to load at times.