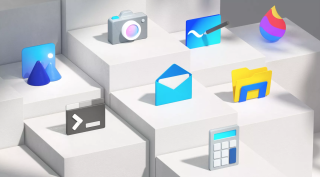 Windows Insider Program members are getting an early look at a tiny part of Windows 10X. How tiny? Well, it seems that Microsoft is bringing some of the operating system's redesigned icons to Windows 10, per Windows Central. These are also in line with Microsoft's Fluent Design principals.

These icons include Mail & Calendar, Calculator, Alarms, Voice Recorder, Groove Music and Film & TV. We don't yet know if more designs care coming for other apps, including a new Windows logo.

This is all in addition to a number of other new icons that Microsoft has created, including a new look for the Edge browser on Chromium, as well as refreshed designs for the Microsoft Office suite. It's all part of a modernization through Fluent Design that Microsoft announced back in 2017.

Windows 10X is the upcoming version of Windows designed specifically for new foldable devices from Microsoft, Asus, Dell, HP and Lenovo. It will feature a redesigned interface that's supposed to take advantage of dual-screen devices.

Right now the only way to experience Windows 10X is to use the emulator Microsoft released to help developers prepare their apps for the upcoming operating system. Check out our hands-on with the emulator for our impressions of the new interface.