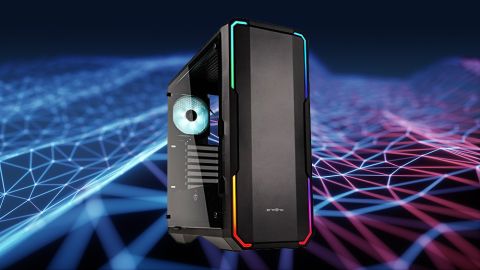 A small ziplock bag containing a system speaker, zip ties and a variety of screws is located in one of the open 3.5" drive bays. The case manual and a flexible plastic block-off panel for the top of the case can be found in the PSU area.

The interior of the Enso Mesh is painted black to match the exterior. There are two large cable pass-through holes with rubber grommets in the motherboard tray and two smaller holes in the top of the PSU tunnel. The hole at the upper left hand edge of the motherboard tray is specifically designed for routing fan cables and the ATX12V/EPS12V power cable.

We found it odd that this chassis has what appears to be two mounting locations for 5.25" optical drives even though there are no openings in the front of the chassis.

The overall look is extremely clean, and there is more than enough room for a variety of different system builds.  This chassis can be equipped with coolers as tall as 160mm. A large hole behind the CPU socket area facilitates heat sink changes without removing the motherboard. The Enso Mesh has a total of seven expansion slots and can accommodate multi-GPU set-ups up to 340mm in length and 150mm wide.

Bitfenix claims the Enso Mesh supports up to EATX motherboards, the truth of the matter is that since a true EATX motherboard measure 13 inches deep by 12 inches tall, there are not enough standoffs to install a motherboard of that size.

As far as storage options go, the Enso Mesh can accommodate up to two 3.5-inch hard drives and a total of three 2.50-inch SSDs in the secondary compartment behind the motherboard tray and under the power supply shroud.

The Enso Mesh comes with a built in RGB controller located behind the motherboard tray that allows for color change and basic RGB effects such as breathing, fading and pulse, all selectable from the button on the front of the case. For those with ARGB-capable motherboards, the LED-lit RGB fan are natively compatible Asus' Aura Sync lighting software.

We recommend installing a second intake fan or, at the very least, a higher-volume 140mm fan in any chassis that is equipped with a single 120mm intake/exhaust fan. The two factory-installed fans simply do not provide enough airflow to keep the components in our test system cool.

It should also be noted that the use of a video card with a blower-style cooler with this fan configuration has a negative impact on the airflow profile of this chassis. Blower-style GPU coolers tend to immediately draw in most of the cool outside air provided by the single 120mm intake fan and force it out the rear of the chassis. While this benefited graphics card temperatures, the rest of the system suffered as a result in our testing.

Radiators and all-in-one coolers can be mounted in the front and rear of the this chassis. The rear mounting location supports 120mm fans while the front supports radiators and AIO coolers up to 360mm.

Although fans can be mounted in the top of the Enso Mesh, due to space limitations, radiators and all-in-one coolers will not fit here with fans attached.

We tested power supplies up to 180mm in length without any issues. That said, we recommend using a modular PSU because of the lack of space between the power supply and hard drive racks.