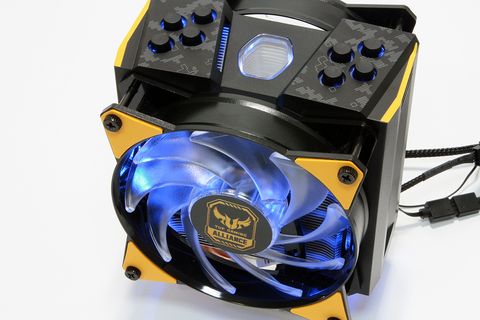 At Computex 2018, Asus and several other companies announced the TUF Gaming Alliance, a collection of components (from motherboards and cases to coolers and power supplies) designed to work together--and look good doing it. We’ve already highlighted a collection of those components used in the Asus TUF Gaming Alliance component build, including two Cooler Master MasterAir heatpipe cooling towers: the MA620P, and the smaller MA410M that we're looking at here.

Of those two (both of which are priced at about $60), this model is far more interesting. Even though it happens to carry the trusty, budget MA410 moniker of other recent models, the MA410M TUF Edition comes out swinging with striking visuals. But it follows up its good looks with excellent performance, besting its larger sibling to truly stand out. Those looking for a fairly compact tower cooler with RGB bling should strap this model to their short list.

While not a complete overhaul of its MA410 sibling, the new MasterAir MA410M TUF Gaming Edition boasts a few new features and a sharp, chiseled look.  We’re here to tell you this is one of the best quad-heatpipe tower coolers we’ve seen in recent months. The MA410P TUF Gaming Edition could single-handedly help topple the fundamental thinking that ‘larger is always better’ when comparing perceived performance between four- and six-heatpipe (or larger) coolers.  Everyone loves when the little guy punches above his weight.

The MasterAir MA410M TUF Edition comes equipped with mounting hardware to support installation on most AMD and Intel sockets, though Threadripper builders will need to seek something more substantial. The familiar Cooler Master flexing ‘X’ bracket, backplate and threaded offsets are employed, since the cooler heatink is narrow enough to allow direct screwdriver access to easily tighten the spring loaded hex bolts. A PWM and 4-pin RGB splitter are both included, along with a newer RGB controller with an included micro USB port, presumably to allow cabled control for lighting and effects (not included).

Beneath the TUF armor shell lies a rather typical 6mm-diameter copper heatpipe cooling tower.  Shrouding allows airflow to tunnel through the cooler fins, rather than it dissipating out the sides, while delivering attractive aesthetics to the top of the cooler.

A pair of 120mm fans RGB fans cradle each side of the heatpipe cooling fins, allowing the CPU to benefit from a push+pull airflow setup. Colorful illumination from the MasterAir MA410M TUF (with 28 addressable LEDs) bathes the case interior with nearly infinite (ok, actually only 16.7+ million) color possibilities. With the RGB fan LEDs located within the fan hubs themselves, the cooling tower RGB lighting diodes are nestled along the external perimeter, tucked just inside of the TUF armor shell.

The direct contact copper heatpipe base of the MasterAir MA410M TUF is nearly identical to that of the its MA410P sibling, though a couple minor changes are visible. Easily seen from either top or bottom, the rounded, hexagonal Cooler Master Logo ‘shape’ is cut throughout the entire set of tower fins, allowing unobstructed view from the cooler top down to the base.  Integrated into the aluminum base sits a small thermal probe, which allows coordinated lighting displays to indicate reported thermal load, should you enable that lighting option.

Installation of the MasterAir MA410M TUF Gamin Edition is rather simple, as both fans are easily removed via the thumbscrews that hold the fans to the TUF armor shield on either side.  Memory clearance problems should be a rare occurrence, as there is adequate height and spacing around the entire perimeter of the cooling tower with the fans installed.