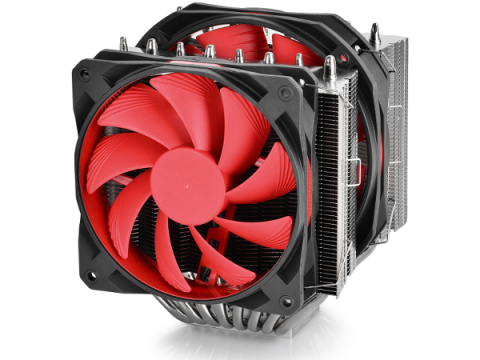 It’s not every day that Deepcool releases a new top-model air cooler. In fact, it was three years ago when we tested its first Gamer Storm Assassin. Yet the first thing we did when the company sent its new Assassin II was shelf it. We’d already reviewed its most recent closed-loop cooler, and a big stack of Z170 stuff was tagged “urgent.” Perhaps some of that stuff could have waited.

Designed to blow past the weak thermal requirements of Skylake, the Assassin II appears ready to hang with the big boys on overclocked Haswell-E Core i7s. Fifty ounces of copper is serious business for serious enthusiasts, and even though it fits smaller sockets, we just can’t bring ourselves to put such a heavy part on any lightweight board.

The Assassin II fits nearly every socket an enthusiast would choose, other than AM1 which usually doesn’t need fans to stay cool with a unit this large. Custom standoffs fit it to the LGA 2011 (including v3) mounting bracket, a universal support plate feeds mounting studs through the back of other Intel Square ILM and AMD rectangular mounting patterns, and a crossbar holds the cooler in place over those studs and brackets. AMD folks must first remove the clip-on cooler bracket to reveal the four mounting holes of their boards, of course, and that crossbar needs to be installed on top of the cooler base, which means it can only be reached by removing the cooler’s center fan.

Deepcool polishes the base of its Assassin II for optimal contact, then nickel plates the copper to prevent oxidation. A reflection of the box logo shows just how smooth the base really is.

We’re installing the 120mm front fan and 140mm center fan that came inside the box and treating the center fan as primary, since the front fan can be removed to reduce mounting space. We’re excluding the spare fans Deepcool included, since they’re not part of the standard package. The 4-fan hub is part of the standard package, but using it prevents us from getting separate tach readings from the two fans.

And, just in case you’re worried about whether or not it fits your case, here are the Assassin II’s dimensions.