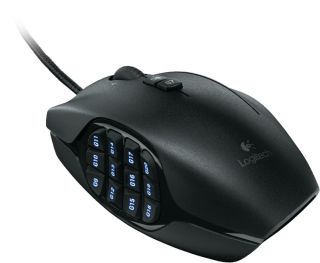 Big into Classic WoW? Want to pwn some n00bs in FFXIV? Then check out this impeccable deal on Logitech’s G600 Gaming Mouse. Yep, Logitech’s premium MMO mouse is on sale now with an impressive $32 off of its retail price, bringing it all the way down to an impressively low $28 that's a killer deal even before Black Friday.

So what does that $28 net you? Well of course, the big thing that comes with Logitech’s G600 is access to those 20 MMO-oriented buttons. What do we mean by that? Well according to Logitech, the 12 primary buttons located on the left side in the thumb rest were developed in conjunction with top MMO gamers and MMO developers alike. There’s two carefully honed “dishes” of buttons (6 a piece) that help your muscle memory quickly pick up where each key is. Combine that with a healthy amount of actuation force, and what you’re left with is a fantastic array of keys ready to bind any ability or item to.

Outside of that you of course get access to the usual bevy of RGB LEDs, (again pulsing through those 12 buttons), on the fly DPI switching, a contoured ergonomic grip, and a solid laser illuminated optical sensor too. Although it’s a bit of an odd combination of sensor, the specs aren’t too shabby, you also get a max acceleration of around 30Gs and a max speed of 160 IPS (4.0 m/s) before tracking drops off.

Is the Logitech G600 going to be for everyone? No, of course not. This mouse was designed with one type of person in mind, the hard-core MMO gamer. Whether you’re raiding with your guild in WoW or smashing out your best rating in the latest Arena season, it’s a mouse designed to give you the peace of mind that anything you need to do, you can do, without being reliant on your keyboard.

At such a low price point though, even if you don’t game on MMOs all the time, it may very well be worth the investment to up your MMO game, without breaking the bank.