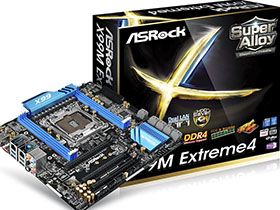 While the X99M Extreme4 includes ASRock’s A-Tuning software, the Fatal1ty X99M Killer instead has F-Stream. Apart from the logos and border color, it’s the same product.

Both boards reached 4.3GHz at 1.2V core using the program’s auto-tuning routine, and both boards crashed after approximately 30 minutes of 16-thread, AVX-optimized Prime95. Pre-programmed overclocks of 4GHz at 1.20V, 4.2GHz at 1.22V, 4.4GHz at 1.3V and 4.5GHz at 1.36V were stable as long as the processor remained under its thermal threshold. The 4.5 GHz setting eventually forced thermal throttling.

The A-Tuning / F-Stream OC Tweaker menu provides hardware access to firmware-level controls. But unlike the programed overclock, it doesn’t require a reboot for most changes. I was able to confirm that BCLK, CPU ratio and certain voltage changes were operational using software and a volt meter, though my changes were far below the software’s range.