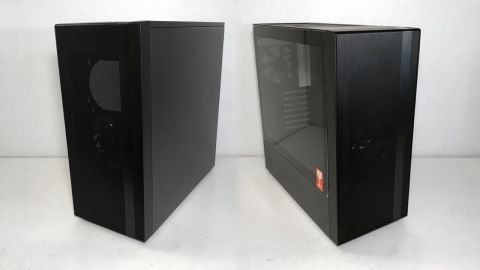 The interior of this chassis is rather large for an ATX mid-tower. At first glance, the NR600 looks similar to other mid-tower cases but, upon closer inspection, we noticed some creative design choices that are not only cost-cutting measures, but also aid in structural rigidity. First of all, the power supply tunnel is non-removable and is riveted to the motherboard tray as well as the front and back of the chassis. This design also makes it possible to use a much smaller tempered-glass side panel than what you’ll often find on similar mid-tower ATX cases.

The seven expansion slots will easily accommodate multi-GPU setups and, for those running long graphics cards, cards up to 410mm (16.1 inches) can be installed in this chassis. You can use CPU air coolers up to 166mm (6.5 inches) tall. Despite the case’s minimalistic design, there’s plenty of space to accommodate a variety of different system builds. A large hole behind the CPU socket area facilitates heatsink changes without removing the motherboard.

The interior of the MasterCase NR600 is painted black to match the exterior. Two large cable passages with rubber grommets live on the motherboard tray, supplemented by two smaller holes in the top of the PSU tunnel to route SSD cables. The hole at the upper-left edge of the motherboard tray is specifically designed for routing fan cables and the ATX12V/EPS12V power cable.

Cooling duties are handled by a single 120mm front intake fan feeding a 120mm exhaust fan behind the CPU socket area. Upon closer examination, we noticed that the intake fan features Cooler Master's AirBalance blade design and operates at 1,200 rpm, while the exhaust fan is of the AirFlow blade design spinning at 1,000 rpm. In theory, this fan combination should provide a positive air pressure environment inside this case. In total, the NR600 supports up to six 120mm and five 140mm fans.

We recommend installing a second intake fan or, at the very least, a higher-volume 140mm fan in any chassis that is equipped with a single 120mm intake/exhaust fan. Although thermal performance was surprisingly good (more on that later) we still recommend adding an intake fan if you plan on installing higher-end hardware in the NR600.

It should also be noted that the use of a long video card with a blower-style cooler with this fan configuration has a negative impact on the airflow profile of this chassis. Blower-style GPU coolers tend to immediately draw in most of the cool outside air provided by the single 120mm intake fan and force it out the rear of the chassis. While this benefits graphics card temperatures, the rest of the system tends to suffer as a result in our testing.

We tested power supplies up to 180mm (7.1 inches) in length without any issues. That said, because of the fixed nature of the hard drive rack, we recommend the use of a modular power supply.