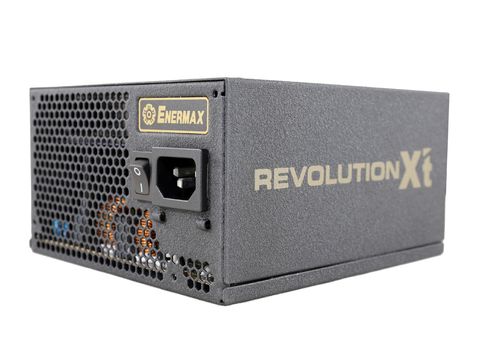 The following graph shows the PSU's total performance rating, comparing it to other units we have tested in the past. To be more specific, the tested unit is shown as 100 percent, and every other unit's performance is shown relative to it.

The ERX750AWT's relative performance exceeds EVGA's 750 GQ, though EVGA's unit benefits from a significantly lower price tag. Compared to other PSUs priced similarly, Enermax falls behind. The company needs to lower its price to make this a more attractive option.

The ERX750AWT scores almost the same performance per dollar ratio as Corsair's RM750x, which costs only $10 more. With such small price difference, your choice in the 750W segment should be easy. In addition, the RM750x comes with a 10-year warranty, while Enermax guarantees its workmanship for five years.

The graph below depicts the cooling fan's average noise over the PSU's entire operating range, with an ambient temperature between 28 °C and 30 °C (82 °F to 86 °F).

The following graph shows the ERX750AWT's average efficiency throughout its operating range with an ambient temperature between 28 °C and 30 °C.

In this graph, the ERX750AWT takes the lead from both Corsair units. However, the ripple suppression of the latter is way better, since Corsair uses more filtering caps, inevitably affecting efficiency.

Prev Page Ripple Measurements Next Page Pros, Cons And Final Verdict
9 Comments Comment from the forums
Be In the Know