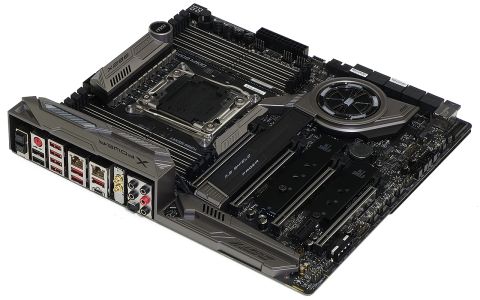 We’re putting the overclocking section of today’s analysis atop the page since it’s what you want to see most. This also gives me an excuse to top the page with the firmware settings of each competing motherboard. Some readers will certainly want to jump past boring benchmark charts to the conclusion, but you never know when something weird will happen there.

MSI’s X299 XPower Gaming AC takes third place in a hotly-contested DRAM overclocking race, where its competitors use more voltage. That’s MSI’s fault, since the voltage regulator is adjustable only on 10mV steps, forcing me to choose 1.348V rather than a test-violating 1.358V. The 5mV increments of competitors simply let me choose something between those two options.

If performance is the point of overclocking, we might as well end our analysis here. The X299 XPower Gaming AC has the highest memory bandwidth ever extracted from our consumer motherboards. And given that a 4.40 GHz CPU overclock performs virtually identically across all boards, that’s the one place where any single product could really stand apart from the rest.

Since we assume all overclockers will want to set up clocks themselves, we take every possible measure to eliminate automatic overclocking from our performance tests. We’d hate for someone to assume that “if brand X performs Y% better than brand Z at stock, it will also perform that much better overclocked,” because this simply isn’t true. Yet enabling all available CPU-based power-saving features and disabling automatic overclocks is no longer a perfect method to achieve similar results, because Intel is allowing motherboard manufacturers to violate its stated 140W TDP on consumer-market enthusiast motherboards. The Core i9-7900X rarely runs at its full performance level at full load but is instead clocked down to stay within a power and heat envelope: Expanding beyond that envelope allows power inconsistencies that we can’t properly compensate.

Seeing that everyone but Asus uses an unlocked TDP by default, we’d like to see how much this costs us at the power plug before moving on to see how it impacts performance.

Even if we assume that the extra features of the X299 XPower Gaming AC and X299 Aorus Gaming 7 costs a few watts, both far exceed the X299 Gaming i9, and even that model appears a power hog compared to the Intel standard maintained with the Prime X299 Deluxe.

All of this means that even with all power savings features enabled and all overclocking techniques disabled, the X299 XPower Gaming AC and X299 Aorus Gaming 7 are running close to the limit of this CPU’s thermal interface. Of course, we could try to force compliance by using a 140W CPU cooler, but that’s not a realistic limitation of the enthusiast performance market. Let’s see how these things affect performance.

For all of its extra power consumption, an uncapped TDP does little to alter 3DMark and PCMark scores. The X299 XPower Gaming AC leads the closest-power-level X299 Aorus Gaming 7 through 3DMark, but that could be due to its enhanced memory performance.

It’s not until we reach Sandra Memory Bandwidth that we see just how great the X299 XPower Gaming AC’s memory bandwidth advantage is. Remember that this is at DDR4-2133 defaults, not even the XMP settings that were too high for this particular board to use.

We expected a board with the memory bandwidth advantage of the X299 XPower Gaming AC to wipe the floor with its competitors in the memory-sensitive F1 2015 benchmark, but were surprised to see it also take a noteworthy lead at the lower test settings of Ashes. The reason it’s noteworthy isn’t that it’s visible in game play, but rather that it falls outside of the normal variation between consecutive tests.

The X299 XPower Gaming AC includes Nahimic audio solution, with its ability to virtualize 3D through headphones and help you locate your enemies in games. The only game in our suite affected is Talos, where the darker bars show how much lower the score is when Nahimic is running. Since Nahimic is a major feature, the lower numbers are used in our final tally.

The X299 XPower Gaming AC burns through our mixed workloads with flair, but drops back a little in Adobe CC and MS Office workloads. In the balance we expect . . . balance.

The performance penalty imparted by Nahimic in one of our games offset the performance gained in F1 2015. Similarly, performance losses in Adobe CC and MS Office offset gains in mixed workloads. The 1% combined performance deficit is pitted against its 16% above-average power consumption level to produce sub-par efficiency.

People like value charts that show “bang for the buck,” but added features don’t produce a performance bang. We try to make the comparison fair by comparing similarly-priced boards and then discussing feature differences.

The X299 Aorus Gaming 7 and X299 Gaming i9 are the boards for MSI to beat with superior features. All three have at least dual Gigabit Ethernet and some kind of 802.11ac controller, but X299 Professional Gaming i9 also adds 10 Gb/s Ethernet as a third wired network interface. That’s hard to match on the networking front, let alone beat. That same board has a weaker 433 Mb/s Wi-Fi controller, but that concession hardly puts a dent in the value of its wired interface configuration.

The Gigabyte board has five x16-length slots but can connect three cards in SLI, even when equipped with a 44-lane CPU. ASRock’s sample is wired for four-way Crossfire and SLI, but slot spacing issues limit most cards to 3-way configurations. The MSI X299 XPower Gaming AC can do 4-way CrossFire or SLI with a 44-lane CPU, 3-way with a 28-lane CPU, and . . . no-way SLI with a 16-lane CPU because four of its lanes are dedicated to M.2. Talk about a mixed bag.

Thus, while the X299 XPower Gaming AC has all the features needed to justify its price, it can’t convincingly beat its competitors in features for the money. You’ll probably buy it anyway if you need 4-way SLI in addition to its high-end features, and we might even be tempted by its high memory bandwidth. I’d even give it an award for that last accomplishment, if any of our awards were applicable. Yet as I sit here looking at its PCIe 3.0 x8 to dual M.2 adapter card, I think to myself, I can’t find one of these for sale anywhere. That’s something. And if you’re in the market for 3-way CrossFire or SLI and three CPU-driven M.2 drives, that card may be the only thing the X299 XPower Gaming AC needs to get your stamp of approval.