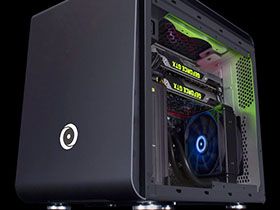 Even as mini-ITX cases appear to be getting bigger, microATX is getting smaller. The Rodney Dangerfield of form factors, microATX is often ridiculed by enthusiasts who just can't get enough room for high-end hardware and skipped over entirely by the crowd shopping for ever-shrinking form factors. The brief window of opportunity that microATX gaming cubes had to impress with their diminutive dimensions is all but forgotten, lost to the din made over slim little boxes housing GeForce GTX Titan cards.

But as anyone who built a PC using a cube-shaped enclosure will tell you, that probably shouldn’t have happened. The microATX form factor gives us four slots of expansion, enough room for at least four DIMMs, and space around the processor interface for an enthusiast-class voltage regulator. That’s because the ATX-sized upper portion of the motherboard remains, even after a microATX's platform's three bottom slots are trimmed off.

These days, the word compact seems to apply most specifically to mini-ITX-based boxes. But Origin PC finds a loophole in that theory by using BitFenix's Phenom M. Nearly an inch shorter in both length and height than the $2500 mini-ITX Performance Build we put together for our System Builder Marathon last year, the Phenom moves its power supply to the front, creating room for five expansion slots.

Those cards by themselves sell for about $1400, so Origin has a bit of justification for pricing its diminutive box at $4215. The extended warranty adds $269 compared to the company's baseline one-year plan, but Origin wanted us to include it as part of the company's package. For enthusiasts who'd rather let someone else hold the screwdriver, this is an affordable insurance of sorts.