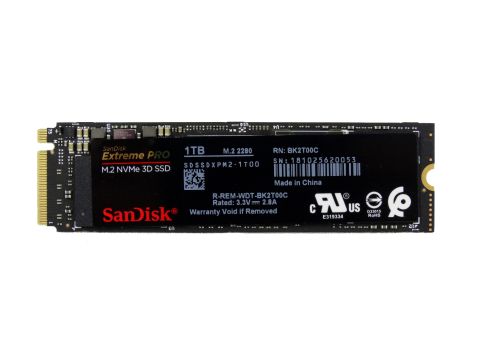 If SanDisk released the Extreme Pro 3D NVMe SSD in January, we would have erupted with thunderous applause. A lot has happened since then, but there is even more just under the surface.

For SanDisk, the slew of products shipping with the new SMI SM2262 controller pose a much larger threat. When it comes to consumer storage HP doesn't have strong brand recognition or the long history of reliability like SanDisk has, but the SMI-powered 1TB HP EX920 is impressive. That said, what about Adata, or Intel? Both will have 1TB SM2262 products on the market soon. More will show up before the end of the summer, and at some point, the performance-oriented SM2262EN will finally land.

The SanDisk Extreme Pro is still a very good product. The company obviously built this as a Samsung 960 EVO challenger, and it hit the mark. The two drives traded shots in our testing, and if you understand your workload, you can choose one or the other based on certain strengths. The Extreme Pro is better for sequential workloads, so the true "creatives" have a targeted drive that performs best with large files (videos, high-resolution pictures, high-bit-rate audio). In contrast, the 960 EVO works best for general computing due to its stronger performance in random workloads.

Given the Extreme Pro's history, we really wanted to see a 960 Pro competitor with a ten-year warranty and class-leading performance. Instead, we got a more subdued upper mainstream NVMe SSD that is targeted to a specific segment of the market. In this case, the segmentation actually works, but that only means a smaller group of users will actually benefit.