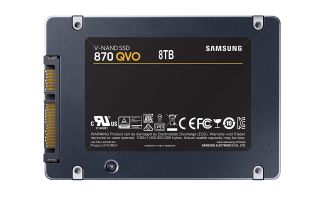 If you're looking for an ultra-high-capacity SSD aimed primarily at storing files, you might want to keep an eye out for the upcoming Samsung 870 QVO SSDs. The 1 TB and 8 TB models have been mysteriously listed on Amazon for preorder, though few specifications are available at this time.

The parts fall under SKU numbers MZ-77Q8T0B/AM and MZ-77Q1T0B/AM for the 8 TB and 1 TB models, respectively, and it wouldn't surprise us if 2 and 4 TB models also hit the market soon.

Samsung's QVO SSDs are aimed at users who prioritize big storage over performance and who keep an eye on price per gigabyte. The SSDs will likely use Samsung's QLC (quad level cell) 3D V-NAND tech like their QVO 860 predecessors, which is how they're able to accomplish such high capacities at relatively affordable prices. These SSDs use a SATA III interface for data transfer.

At this time, we don't know the unit's read and write speeds, nor endurance or power consumption. Given that these units are QLC based, write speeds and write wear resistance are bound to be particularly vulnerable, so if you are interested in these SSDs, ensure that the workload you're putting them under is primarily read-based.

The 1 TB model's preorder price is $130 with availability on June 30, with the 8 TB flavor exchanging owners for a hefty $900 from August 24th onwards. These are steep figures, but will likely come down as soon as the products actually release as NAND markets recover from the pandemic.