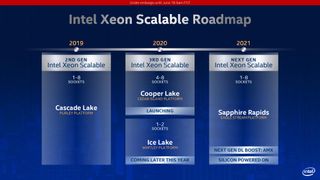 Lisa Spelman, Intel's Vice President and General Manager of Intel's Xeon products, announced that the company has finished its first power-on of the company's forthcoming Sapphire Rapids processors. These processors are slated to arrive in 2021 and will re-unify Intel's Xeon stack into one family that addresses servers that span from one to eight sockets. In the interim, Intel will split its Xeon lineup between Cooper Lake processors that address four- to eight-socket systems, and Ice Lake processors for one- and two-socket servers.

Intel also disclosed that the Sapphire Rapids processors support Intel Advanced Matrix eXtensions (AMX) that are targeted at improving performance in training and inference workloads. Intel hasn't shared the details surrounding AMX yet, but says the specification will be published later this month.

Huawei inadvertently posted a presentation outlining a few key Sapphire Rapids specifications last year, including that the processors will support eight-channel DDR5 memory and PCIe 5.0 support. It's important to remember that early specifications can change as the product works its way to market.

Intel's Sapphire Rapids processors will join Intel's forthcoming Ponte Vecchio Xe graphics cards to power the Aurora Supercomputer that is slated to come online in 2021 at the Argonne National Laboratory.