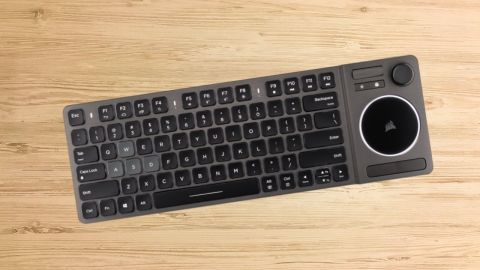 There's a huge amount to love about the Corsair K83, but there's also a whole host of crazy features bolted onto it that don't come close to reaching their potential. Given that it's directly fighting much cheaper products, we expected the K83's gimmicks to work a little harder.

TVs have long been the focal point of the living room, but with the response rates and input lag of modern TVs, home theater PCs (HTPCs) are beginning to make themselves comfortable in the heart of home. That means more than just watching TV and movies, of course, but also big-screen gaming, which deserves bold peripherals.

While the Corsair K83 entertainment-focused wireless keyboard meets that mark, it's clear that it's not specifically designed for gaming. Instead, it makes a stab at bringing all the facets of versatile PC control into one compact package. And, well, it doesn't quite get it right.

The Corsair K83 is priced around $99/£120. That's a lot of cash for a keyboard, wireless or not. And with Logitech's wireless mechanical G613 keyboard retailing, at the time of writing, for as little as $73/£80 (and basic wireless keyboards for a tenth of the K83's price) the less tactile K83 really has its work cut out for it.

There's no denying the K83's handsome profile or unique layout. It's a beautifully slim package with low-profile scissor switches and a creditably strong build to its aluminum-topped base. The choice of neutral coloring, a host of grays and blacks backed up by neat-looking white LED lighting, means the K83 doesn't shout visual obscenities when sitting idle on your living room table. On either edge of the underside is a scooped-out finger grip. At 1.1 pounds (480g) it's surprisingly heavy, so those grooves definitely come in handy.

Then there's the layout, specifically the right hand cluster which lives where you might expect a numpad. This is the K83's key selling point, its most unique feature and, we suspect, the product of a lot of tense design meetings with far too many ideas on the table and little regard for feasibility. There's an LED-rimmed circular touch pad with a pair of buttons below, one raised slightly higher than the other. There's an analog joystick, and seated on the keyboard's back edge close to the stick is an "L" button and an "R" button beneath that (pictured above). There's also a super-smooth volume roller with click-to-mute. And not one of these elements comes close to reaching its potential.

Take the circle pad. It's pretty neat when you're piloting the pointer with your right thumb and just about the right size for you to be able to reach every edge. Use a finger, though, and it becomes clear why trackpads aren't usually circular: there's just not enough space to move. The pad is an irritatingly small area, and the small buttons mean complex actions require an uncomfortable twist of the wrist to pull off.

Then there's the joystick, perplexingly designed with an enormous flat top and a huge flapping travel distance. While this adds a little gamer credibility on the surface, it's simply not a good joystick, and the buttons designed to go along with it are slippery, hard to find, tricky to actuate and very selective about what they work with.

Even the volume control, a wonderfully knurled and slick roller, disappointed slightly. It's so slick, and the click to mute feature so stiff to press, that it's a constant gamble between whether you'll actually manage to mute your audio or accidentally slip the dial up to 10.

Flat keyboards tend to either hit one of two ends of the spectrum. Compared to, for example, the flat-faced and crammed layout of the compact Cooler Master SK650, which can be very hard to type on, the K83 looks good. Its keycaps are both well-spaced and dished enough to catch the fingers, so we hit the more accurate end of our typing average on typing tests. Its scissor switches, while obviously lacking the travel of a full-height mechanical board, are some of the best scissors we've tried, with solid actuation feedback and enough resistance to cradle resting fingers.

You might think that they typing experience is a bit irrelevant for a media keyboard, and in some ways you'd be right. We don't think Corsair really expects this to be used for serious hours of work, despite the battery lasting a healthy 40 hours. It's meant to float around your lounge and be used occasionally for recreational activities. In that context, we have no complaints about its position as a typer.

That said, the layout could be better. For starters, the arrow keys are unnecessarily cramped, and certain common controls have been ushered off to The Land of FN. This includes the Delete key, which is just about inexcusable for coders and writers alike. Even the trackpad hurt the typing experience. Its multi-finger gestures are less than reliable, and the cramped confines of its circular borders felt far too small for gesturing.

Although this keyboard isn't meant for work, there's a good chance it'll pull double duty, which is where the niggles really show themselves.

The K83 might have a delineated WASD cluster, a built-in joystick and marketing shots showing grinning youths leaning uncomfortably in the midst of what we presume is some overly intense firefight, but we can't help but feel that it wasn't really meant for any kind of fast-paced gaming. Attempting to play Apex Legends on the living room TV using a thumb on the circle pad was somewhat unfair to our poor teammates, and using its joystick for console-esque view shifting felt terrible. More sedate games like Civ VI predictably fared much better and is about as good as the K83 gets at serving as a gaming peripheral.

Pulling out a mouse (and essentially ignoring the features that make the K83 special) revealed that the keys are as sufficient for action as scissor switches can be. If you already have a responsive wireless mouse and a suitable surface for it, you likely won't notice any input lag coming from the K83's wireless connection. But if you want to game from your couch with a mouse, a keyboard-lapboard combo, like the Razer Turret or the  Corsair K63 bundle, offers far fancier keys and built-in room for mousing. A much better choice.

Switching from the proprietary 2.4 GHz wireless connection to one of the two Bluetooth channels did introduce noticeable input lag -- but being able to quickly switch between three independent connections is a neat feature if you're planning to use this to gain an advantage on a mobile device, intend to switch it between the living room table and your desk with any regularity, or want to use it to control a smart TV.

Things are pretty slim in the customization department, much more so than they should be. You can cook up simple macros in Corsair's iCUE driver, but they're software-only, so they won't carry over into either of the Bluetooth modes. You can (mercifully) tweak the sensitivity of the over-sensitive analog stick, or change how long it takes for the K83 to drop into automatic standby. But that's about it. More flexibility to customize the right hand control cluster would have been appreciated, and perhaps it'll come in future versions.

Lighting-wise, we loved the subtlety of the white backlighting, particularly the illuminated ring around the touchpad. Dropping the K83 into its dimmest mode in a darkened room meant it was fully visible without being distracting. And shortening the auto shut-off time was perfect for making the keyboard instantly fade into the background I was done with it.

The concept behind the Corsair K83 is so much more solid than its execution. If it had a better analog stick with controls that weren't slippery, or a pair of analog sticks and underside buttons that were completely customizable, the keyboard might have felt a little better. But then it might also have looked even more ludicrous than it already does.

The keyboard's price, meanwhile, makes it a really tough sell. For about $15/£12 you could pick up a compact handheld keyboard / trackpad combo; for around $25/£25 you could pick up Logitech's perfectly functional trackpad-added K400 Plus.

But as a seldom-used entertainment keyboard, one used to poke at a media center then dropped on the couch, the K83 meets the mark very well, even if it's at a more premium price.