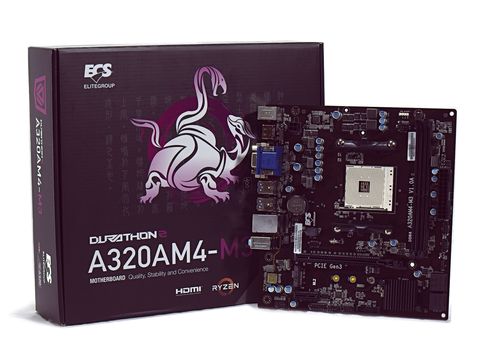 Surprisingly, on this installation and test run, the ECS M3 scored nearly 10% ahead of the competitors within the PCMark suite, particularly on the Home, Work, and Adobe workloads.

Sandra slowed down the hype train, with a minuscule win at arithmetic and multimedia; cryptography and memory-bandwidth workloads lagged. These Sandra results were repeatable, so we hope to not see these trends in further results.

Cinebench scores placed this ECS board in the middle of the pack. Compubench focuses more on GPU computation, and it’s good to see that our driver issues have been resolved going forward. In terms of scores, the ECS M3 is roughly 1 percentage point below the average performance for the test.

3DMark Skydiver shows interesting results, where the graphics score is notably higher than the competitors, but the combined result is pulled down by the physics score. However, relying on the GPU more with both Firestrike workloads brings us back to what we should expect from our gaming results.

Application data comes as no surprise, but the ECS sample here managed to fly under the radar with no large wins or loses. InDesign shaved a half second off when compared to the other boards, and a second here and there helps keep the ECS M3 on a viable footing going into the gaming workloads.

As a budget board, the ECS is aiming to provide essential functionality at a competitive price. For our bench suite, Ashes of the Singularity: Escalation showed nearly 3% improved 1080p performance compared to the other samples. It struggled at the higher batch levels and detail levels at 4K, unfortunately, but do we really expect people to game at 4K on this board? Probably not.

The M3 lagged behind a few frames in F1 2015 at 1080p and Ultra details, and surged ahead at 4K Ultra for second-place finishes. It is interesting to note that the minimum frame rates were ahead (by nearly 20%) compared to the ASRock X370 Killer SLI/ac.

On the flip side, Metro at 1080p showed some much reduced performance for the ECS M3 at High presets, which might reflect some of the CPU issues seen in our previous benchmarks. Fortunately, the Very High setting helps equalize the field, and the average frame rates for all samples were within a third of a frame. Our 4K settings also showed similar results to the 1080p Very High, and all of the samples’ average frame rates deviated by less than 0.5%.

The Talos Principle favored the ECS and Gigabyte AB350N across all settings and resolutions, and this can be attributed to the game update we mentioned in the Gigabyte article. Regardless, all boards ran exceptionally well, and even 4K at Ultra is playable on this three-and-a-half-year-old GPU.

Overall, performance for the ECS A320AM4-M3 actually exceeded our expectations for such a low-end offering from a relatively small brand here in the States. For synthetics, we did observe a few key benchmarks scoring lower-than-average results, but on the flip side, application and gaming benches comported themselves well. From a combined metric, rocking 99.7% of all the averaged averages is nothing to scoff about, and it goes to prove that AMD isn’t leaving any off-the-shelf performance from the A320 platform.

A brief word on overclocking: A320 does not officially support overclocking. ECS takes this to heart and completely locks out the opportunity to adjust CPU-specific variables to increase performance. On the contrary, memory speed is overclockable, but without the ability to increase voltage, most users will see a limited opportunity without DIMMs specifically binned for 1.2V at elevated data rates.

With that out of the way, our power tests here are reported as total system power draw from the wall using a Kill-A-Watt meter. As expected, each product in the chart shows very consistent results for idle, Prime95 CPU, and GPU FurMark tests. Unfortunately, as we run the complete system load test, the system is having to allocate CPU resources for completing both sets of work, thus making constant power measurements difficult with our current measurement sample rate. Averaging out each use case results in system power draws all within 3W of each other. With reduced functionality and IO on the system, we were hoping that the A320 chipset would be a little more efficient, but maybe that’s just a testament to the chipset and system ecosystems as a whole.

Temperature reporting is beginning to become more stable as we standardize our AM4 test bench behind the Corsair H110i, and both the Gigabyte and ECS products conform to the standard. As expected, this 240mm AIO solution is superior to the more modest Noctua solution at lower fan speeds, and the small-form-factor cooler naturally runs very warm. However, we could foresee the Noctua SFF cooler being used on this system, as it does adequately cool the processor and provide downdraft air to the regulators. Back on topic, the ECS board also performs well for the Vregs, despite lacking the heatsinks and contact points that the other three solutions use. This bodes well for the ECS M3, in that it can be deployed in several different use cases and not fear the dreaded white smoke of a cooked regulator or thermal throttling (within reason, of course).

Efficiency, then, is really a nit-pick in our statistics at this point, with an average performance spread of only 2.4% dictating the efficiency spread by almost 1.9%. The graph may at a glance seem to represent the data in a negative light, but both the ECS and Gigabyte samples do perform well, regardless.

At the time of this writing, a few vendors were listing the ECS A320AM4-M3’s sibling (the A320AM4-M3D) at a price of roughly $55. That, coupled with the nearly perfect average performance metric, shows a decent-size value win for the ECS. If fast-boot-enabled and set-it-and-forget-it deployment is all you need from a board, then clearly this board makes a good business case.

However, while performance keeps it in the green, the user experience is enough to make or break a product. Some purchasers want to enjoy the entire package from installation to delivery, and the ECS product is the boy you pick at dodgeball because he looks tough, but ends up getting pelted by the ball because he forgot to tie his shoes. Maybe after a few rounds or software revisions, this product could be a contender. Even investing another $20 per shippable product would yield dividends in usability and still win the value argument.

But for $50 bucks, it’s hard to complain. What you see is what you get. We could envision this product going into a build for Scrap Yard Wars or for a relative who just wants to boot a box and play Minecraft.