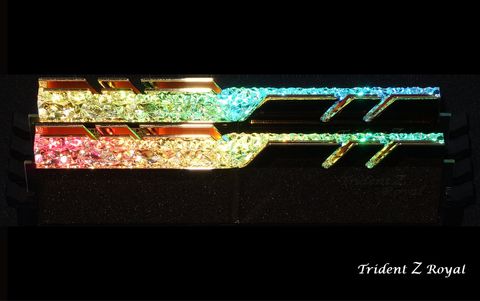 All that glitters is not gold: The Trident Z Royal kit we received is also available in chrome, and the actually glitter comes from eight RGB LEDs under a special light diffuser that resembles a cluster of clear crystals. The underlying components of this DDR4-3200 C14 version are spectacular, but the price for the visual upgrade is a little higher than we’d like. We’re sure big-spending builders won’t mind. A little extra money is a small price to pay for the ability to house your volatile data inside a pair of RAM sticks that look like they came from a swarovski store

G.Skill uses the word “Diamond” to describe the appearance of the crystal-like light diffusers adorn its Royal series of RGB memory. Oh, there are also the options of gold or chrome—er, “silver”—heat spreaders, but you’re probably paying more to have those parts polished than for the thin layer of metal that gives them their color. We’re looking at an approximate $40-$60 premium for the appearance package (compared to identically-rated TridentZ RGB black modules), but that premium does include a fancy new RGB controller, a velvet-finished retail box, and a polishing cloth. Your spring PC cleaning just got more complicated.

The Royal series includes everything from lowly DDR4-3000 CAS 16 to vaunted DDR4-4600 CAS 18, and the reason our “price premium” quote has so much range is that even the DDR4-3200 parts are available in both cheaper (16-18-18-38) and quicker (14-14-14-34) latency versions. While we received the better parts, anyone who buys these will likely be a little annoyed that the premium for Royal appearance package is $20 higher on the CAS 14 version than on the CAS 16 version. Both kits have the same appearance upgrade, after all.

You’re going to want to make sure you have an XMP-capable motherboard before buying this kit, as the best non-XMP frequency and timing set is DDR4-2133 CAS 15. That implies that these Samsung’s B-Die ICs are the cheaper “PB” version, as opposed to the DDR4-2400 (RC) and DDR4-2666 (TD) variations. With that said, XMP is an overclocking technology, and some of our best overclocks have come from its DDR4-2133 chips. The XMP rating of DDR4-3200 CAS 14-14-14-34 comes at the same 1.35V as most other performance-oriented DDR4 DIMMs.

While the RGB lighting can be synchronized on the motherboard, our lit-up image instead uses a custom USB-powered jewelry box that G.Skill provided to assist in our photography. Nobody said the photos needed to be of G.Skill’s memory, however. We’d like to suggest that G.Skill make these non-purchasable display cases available to a few computer shops as well, since these seem to be the perfect promotional item.

G.Skill’s new RGB controller allows users to select individual colors for each LED, or pick from a wide range of solid and changing color patterns, like as Breathing, Rainbow, and Breathing Rainbow. We found that Comet Rainbow does a great job of highlighting variations in the crystal-style diffusers, though the new controller’s lack of support in motherboard-based RGB programs currently prevents motherboard-to-DRAM RGB synchronization.

We put G.Skill’s Trident-Z Royal up against the latest DDR4-3200 RGB kits available from Teamgroup, Adata, and Gigabyte.

Prior to today’s evaluation, we upgraded to a Z390 motherboard from Asus and Intel’s recently-launched Core i9-9900K. MSI’s GTX 1080 graphics card and a Toshiba/OCZ RD400 SSD to minimize other system bottlenecks. The necessary retests gave us a chance to reduce the total number of configurations by one while still presenting a broad spectrum of data rates from DDR4-2400 to DDR4-4000.

The better-rated DDR4-3200 CAS 14 kits vastly outpaced the CAS 16 kits as we tested them at four data rates to find the lowest stable timings. The Trident Z Royal reached a slightly better CAS 10 at DDR4-2400 compared to the Nighthawk Legend, and the Spectrix D41 slightly edged out Aorus' RGB Memory at DDR4-3466. Neither of the CAS 16 kits could reach DDR4-4000, even when given super-lengthy CAS 21 timings.

In fact, both the Trident Z Royal and Nighthawk Legend kits reached exactly DDR4-4000, crashing even at DDR4-4017, which was attempted using the motherboard’s DDR4-3900 setting with a 103 MHz BCLK. Of the lesser DIMMs, XPG Spectrix D41 breaks past the board’s DDR4-3866 setting, while the Aorus RGB Memory gives up the fight at any setting beyond DDR4-3733.

Two sets of memory reached the same timings at DDR4-2933 through DDR4-4000, so it’s not surprising to see those same kits produce matched performance in the Sandra Memory Bandwidth. The Nighthawk Legend appears to have a couple hiccups in Sandra Latency, so we might still see a winner emerge from real-world tests.

Or maybe we won’t see a clear winner. The Trident Z Royal leads by mere tenths of an FPS at most settings and even loses to the Nighthawk Legend at one setting. And if you were only planning to use stock XMP settings from the outset, its margin of victory is paltry. If nothing else, the new test platform’s eight-core CPU appears to squeeze down the relatively large performance differences previously experienced in our 7-Zip workload.

The $60 price premium for Trident Z Royal DDR4-3200 C14 buns it in our value metric, which is somewhat amusing since the same Trident Z DIMMs without the Royal treatment are cheaper than the Nighthawk Legend. In fact, a quick look at one of our favorite vendors shows that Nighthawk Legend splits the difference between Trident Z Royal and the black-adorned TridentZ RGB upon which it’s based.

We can’t speak for anyone else, because everyone has their own priorities, in life as well as PC building. But we really had to ask ourselves whether we’d spend $60 more to get our black TridentZ RGB gold plated (though not with real gold), adorned with a flashier light diffuser, and upgraded to a newer RGB controller.

Given that the price premium on the CAS 16 version is $20 less, it really looks like G.Skill is trying to figure out how far the company can push prices here as well. So I made it personal: Were I trying to create a specific look, I might pay an extra $30 for modules that had that look. And at that premium, the Trident Z Royal could have matched or beaten its closest competitor in value. That would have been a win/win for both the buyer and seller. But like I said, your priorities may be different.

It's also possible, of course, that G.Skill could lower the price. But given that prestige and high prices often go hand-in-hand, if this Royal RAM were suddenly affordable to everyone, it would probably lose its appeal--at least to those looking to build a truly elite power rig.