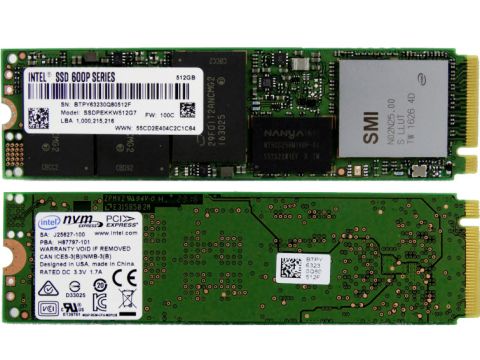 The Intel 600p isn't the low-cost SSD for everyone. This NVMe-based product brings the technology down to the mainstream, but users should be aware of the low endurance rating and what happens when you cross the endurance line. 72TB may or may not sound like a lot of data, every user is different, but there is no negotiation at the end. Intel is just the first company to release an entry-level NVMe product, but more are coming.

Update, 10/7/16, 2:30PT -Intel changed the endurance rating for three of the four 600p SSDs, and we have the new endurance threshold listed below. We have further detail in the Intel Quietly Increases The 600p Series Endurance Ratings article.

We talked about the emerging entry-level NVMe SSD category in the Patriot Hellfire review and Samsung 960 EVO Preview (with the OEM PM961). Today we go straight to ground zero with the Intel 600p that puts entry-level NVMe at our fingertips.

The Intel 600p's low price made immediate waves when online retailers first posted the new SSDs. The 900p retails for significantly less than other shipping NVMe SSDs, and at the time of writing, there have been several glowing reviews of the entry-level NVMe SSD that fanned the flames. It appears the 600p is steadily moving to cult-like status in some circles, but this is not a resurrection of the Celeron 300A.

There are always trade-offs with any entry-level product, and it's important to find which corners the manufacturer cut. The Intel 600p and the 6000p (it's professional cousin with vPro and full disk encryption) both have significantly lower performance than other NVMe SSDs. Lower performance is the kind of attribute that many will point to as the reason why the drive is so cheap. Sadly, performance wasn't the only sacrifice Intel made to deliver the low price point. We dove a little deeper into the details, especially the endurance restrictions, and came away feeling like Intel cut the 600p in half. Before we get to that, let's look at how the 600p came to be.

Micron has a close working relationship with Marvell, and the company uses its Dean 4-channel controller for the Crucial MX300 mainstream class SSD. The two companies continue to collaborate, but SMI's low-cost controllers power many of Crucial's entry-level SSDs.

Intel's predicament is a little more complicated. For several years, we all thought of Intel as an SSD controller company, which is a perception that dates back to the company's first SSD products. What we didn't know was that LSI Corporation, a fabless semiconductor vendor, handled the hardware design (later SandForce, too) while Intel contributed the firmware. Intel and LSI mingled together publicly with SandForce products until LSI CEO Abhi Talwalkar sold the company to Avago, and Intel's controller design house went with it.

In recent years, Avago acquired several companies and radically increased the price of existing products - some have increased by as much as four times. Avago continues to design SSD controllers, but Intel transitioned to SMI for its latest SSDs.

The 600p uses the SMI SM2260 controller in tandem with Intel firmware. By no means did either company plan to make the 600p the first entry-level NVMe SSD. The 600p was designed to be a premium product to take on Samsung's ever-increasing line of high-performance M.2 NVMe SSDs. Micron canceled the TX3 (with 3D MLC) when the combination of the SMI controller and IMFT flash failed to deliver high performance, but Intel forged ahead with its first entry-level NVMe SSD.

All four Intel 600p SSDs ship with a five-year warranty and have the same 72-terabyte TBW endurance rating. The TBW rating means the drive can only absorb up to 72TB of data during its lifetime. This is only the second time we've encountered an entire product series that employs a blanket TBW rating. To put this into perspective, the 128GB OCZ VX500 from a recent review also features a 72 TBW rating, but the 1TB VX500 offers up to 592 TBW. 72TB of data writes may or may not sound like a lot to you, but this is a very low endurance rating compared to other 1TB SSDs.

How Intel's consumer SSDs expire once you surpass the endurance threshold is troubling. In an almost over-zealous move to protect user data, Intel instituted a feature on many of its existing SSDs that automatically switches it to a read-only mode once you surpass the endurance threshold. Surprisingly, the read-only state only lasts for a single boot cycle. After reboot, the SSD "locks" itself (which means you cannot access the data) to protect the user from any data loss due to the weakened flash. The operating system typically generates error notifications when an SSD switches into a read-only mode, so most users will restart without being aware that the SSD will be inaccessible upon the next reboot. The process to recover the data is unclear. We reached out to Intel to verify if the 600p also has this feature, but have yet to receive a response.

EDIT: 9/23/2016 Intel clarified the nature of the read-only feature, which is not based upon the endurance limit. All SSDs have spare area that is dedicated to replacing failed cells. The Intel 600p only switches into a read-only mode when the spare area is exhausted. Intel also noted users can copy the data from a read-only SSD by installing it as a secondary drive in another computer. Intel provided an official response outlining the recovery procedure, and we include a more detailed explanation in the link.

Higher-capacity SSDs provide more endurance than smaller models. It is a well-documented fact that most flash can easily outlast the endurance ratings, and Intel is probably erring on the side of caution with the low endurance ratings on its 1TB SSDs. In either case, the 600p's blanket endurance rating may impose a somewhat unneeded restriction on the potentially more-endurant high capacity 1TB SSDs. The Intel 335 Series famously used this technique, but in contrast, the 240GB 335 model delivered 10x the endurance of the new 600p NVMe SSD before retiring itself.

The 600p doesn't utilize a direct-to-die write scheme, so the first write goes to the SLC buffer before the controller flushes it to the TLC area for "long term" storage. This process doubles write amplification, thus magnifying the discouraging endurance situation.

Intel plans to bring the 600p to market in four capacities. The 128GB, 256GB and 512GB products are shipping now, but the 1TB model will enter the market later in 2016. Intel wrote the firmware for the SM2260 controller and paired it with 384Gbit 3D NAND flash running in 3-bit per cell (TLC) mode. Intel was only able to fit three NAND flash packages on the 600p due to the size constraints of the M.2 2280 single-sided form factor. As a result, the 8-channel controller only operates in 6-channel mode.

The odd 384Gbit (48GB) NAND die leads to somewhat exotic capacity points. We've already explored those with the MX300 that ships in 275GB, 525GB, 1050GB and 2TB capacities. Instead of choosing the same path, Intel adhered to standard sizes and rolled the extra capacity into a dedicated SLC cache area. The larger-than-normal SLC buffers should deliver exemplary performance, but that isn't always the case.

The 600p supports an internal AES 256-bit hardware encryption engine but does not support accelerated eDrive or other encryption services in Windows. For those features, you need the up-scale Pro 6000p model that also uses vPro encryption technology. In the SanDisk X400 review, we stated that companies should stop producing separate models for encrypted disks, and we still stand by that line of thought. At least Intel has a separate product line name to specify the encrypted models, unlike the X400.

The Intel 600p delivers better-than-SATA performance, which is a new marketing tagline for the next progression beyond hard-disk-replacement. Performance scales as the capacity increases, but the numbers are so far apart that we need to pick them apart by capacity rather than make blanket statements.

The 600p series uses a fixed-capacity SLC buffer that increases in size with each leap in capacity. The SSD writes incoming data to the SLC-programmed buffer to decrease media wear and increase performance. The 600p does not use a direct-to-die algorithm, which bypasses the SLC cache when the buffer is full like most other SSDs. As a result, when the buffer is full the incoming data must wait while the SSD expunges existing cached data. The "up to" performance is a measurement of the SLC buffer speed, and if you need to write data that exceeds the size of the buffer the performance will fluctuate. We'll explore that characteristic in our tests.

The 600p 512GB increases sequential read performance up to 1,775 MB/s. The sequential write performance also increases to a peak of 560 MB/s, which is the same rating we often see attached to premium SATA 6Gb/s SSDs. The random performance is 128,000 IOPS for both reads and writes, and the 512GB has a spacious 17GB SLC buffer.

The Intel 600p works with Intel's SSD Toolbox software, but the Toolbox doesn't support all of the features yet. The media wear-out indicator doesn't work, nor does the Optimize feature. Intel updated the software on 6/21/2016. The 600p also doesn't have an Intel NVMe driver. We suspect the performance will increase slightly with a custom NVMe driver for Windows. The embedded Windows NVMe driver works with the 600p, and that is what we used for testing.

Intel SSD owners also gain access to the company's data migration software that will clone the data from an existing drive to a new SSD. At the time of writing, the supported hardware list does not list the 600p as a compatible product, but we expect that to update in November 2016 (per the fine print at the bottom of the product brief).

Intel assumes retail shoppers will know what the "SSD6" branding means on the front of the retail package. The back of the box features more information, but there are very few details about the 600p series (the one you are buying). The description reads:

Given our findings, maybe Intel doesn't want you to know too much about this product other than the fact it is cheap. This is where things get really sticky. The Intel SSD 600p product page doesn't list any endurance ratings and neither does the official product brief. As a computer hardware journalist, I learned the thing to look for is what the company doesn't tell you. If you want to find the full specifications list for the 600p, you need to look at the ARK pages, which reveal the low endurance rating.

A paper manual ships with the drive and outlines the installation procedure and the warranty terms.

The shiny color for the controller is the result of a copper-based plate over the chip. The metal is coated to prevent oxidation. I don't think there is enough material to act as a heatsink, but it does give Intel a place to etch some information on the controller. We peeled the label back on one of the drives to see if it is the same SMI controller that Crucial used on its canceled TX3. Unfortunately, the controller doesn't have a label under the metal cover.

Next Page Comparisons And Benchmarks