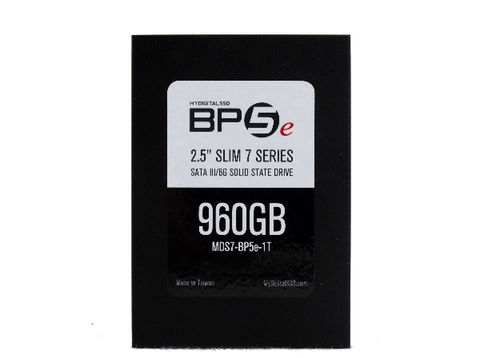 MyDigitalSSD's BP5e is only the second TLC-based SSD I would comfortably recommend to readers. The 850 EVO was the first. Since its release, there have been a number of TLC alternatives, but none really panned out due to low sustained write speed. No one wants to install a big game slower than you'd see from a hard drive. The BP5e fixes that issue and still manages to keep the price low.

Phison's PS3110-S10 controller is the go-to foundation for a number of new SSDs. This month I tested six drives with it, each in a different market segment. Klevv's Urbane drives are in the premium category, while Zotac's Premium Edition family is distinctly mainstream. Today, we're looking at the latest value-oriented implementation" MyDigitalSSD's BP5e.

The Bullet Proof 5 Eco (BP5e) is a low-cost Phison S10-controlled SSD that utilizes Toshiba's 15nm three-bit-per-cell flash. The flash is special because it packs more density per wafer than any other NAND on the market today. Each wafer has a fixed cost, so increasing density lowers the price per bit. Flash accounts for most of an SSD's cost, so anything you can cut from the NAND has a direct impact on pricing.

Phison's S10 controller is roughly one year old now, and it has a proven reliability record. With that requisite covered, we can look at prices and see where the BP5e stacks up. Using Newegg as a reference, we see that the 960GB model costs less than any other 1TB-class drive. At $240, the BP5e undercuts SanDisk's Ultra II by $10 and Mushkin's 1TB Reactor by $20 (the Reactor is our current favorite low-cost, 1TB-capacity-class SSD; you can see the full list here).

MyDigitalSSD is MyDigitalDiscount's house brand. The company offers several drives in difficult-to-locate form factors. It doesn't manufacture SSDs. Rather, MyDigitalSSD contracts with flash vendors to create its own branded products.

Previously, we published a deep dive on Phison's S10 controller with several different types of flash. If you want to know more about the processor's finer details, its technologies and features, then check out the full article. Briefly, though, the S10 was designed to work with both MLC and TLC flash. Its advanced design encompasses nearly every market segment, from the enterprise to value-oriented road warriors. Inside, four cores enable enough performance to rip through taxing workloads using MLC memory. Or, via enhanced ECC methods, it can give TLC flash a long life span. The controller's versatility is earning it popularity with SSD manufacturers that appreciate its reliability, fast time to market and support through Phison's in-house firmware division.

Like many other TLC-based SSDs, the BP5e uses an emulated SLC cache to briefly increase write performance. This helps mask TLC's native performance in most day-to-day tasks. MyDigitalSSD doesn't publish random read or write performance in its specs, so we're using our own. Of course, since we're testing the 960GB model, we have to estimate random performance for the 240 and 480GB versions. Sequential performance did come close to MyDigitalSSD's specifications, despite the fact that it uses ATTO to measure performance and we use different software. We plan to explore native TLC sequential write speeds later in the review, and we'll talk about the conditions under which you'll see performance take a hit.

Competition in the SATA SSD market boils down to pricing, which is where MyDigitalSSD stands out. The BP5e costs less than any other modern drive. At just $240, you get a lot of capacity at a very low price. The 480GB BP5e, at just $125, is also an exceptional value. Every time I type that price I have to make sure I wasn't looking at the 240GB model (which sells for $65). There are several other low-cost SSDs that match the lowest-capacity model's price, including Zotac's 240GB Premium Edition 240GB with MLC flash. So, the 240GB BP5e isn't as attractive as the two larger models.

All three BP5e drives include three-year warranties. When the product was first announced, MyDigitalSSD covered the BP5e with a two-year warranty. However, the company extended the warranty to three years when reviewers expressed their displeasure. Although MyDigitalSSD doesn't publish an endurance rating limit, you're not likely to exhaust the flash with normal use in the short time you're covered. The BP5e doesn't include any accessories. You get the drive in a box, sans software, manuals or adapters.