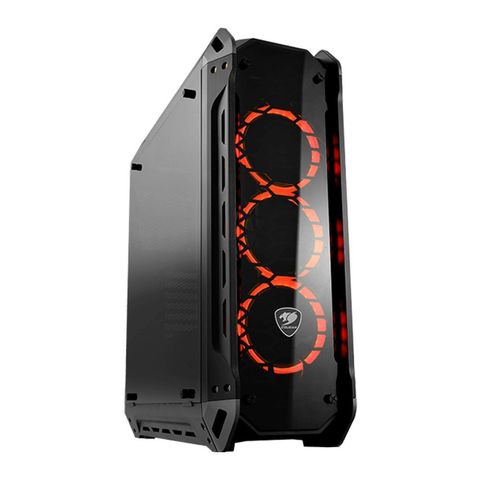 The Cougar Panzer G is a feature-rich chassis with broad appeal and great performance. The sharp lines and aggressive style might not be for everyone but the chassis’ overall performance will delight gamers, overclockers and performance enthusiasts alike. The tempered-glass side panels and LED-lit fans are just the cherry on top.

With its bold lines and aggressive styling, all wrapped in tempered glass and filled with the company's new vortex LED fans, Cougar's Panzer G chassis might be ideal the case for buyers who are tired of monolithic designs.  With its top-notch cooling performance and rugged good looks, this mid-tower case has a lot to offer, but its $120 price is a little on the high side.

Well known in the enthusiast PC community, Cougar has spent the last decade refining its "Real Gear for Real Gamers" approach across a line of products that includes power supplies, gaming peripherals and computer chassis. The latter is what brings us here today.

Cougar’s new Panzer G features tempered glass panels on the left, right, top, and front sides, with a symmetrical frame that resembles metal crossbars. If this design looks familiar, that is because the company has used this aesthetic on several of its Panzer series chassis (if it isn't broke, don't fix it). This industrial design seems to be increasingly popular with other case manufacturers as well. The Cooler Master MasterCase H500P Mesh is a good example of a chassis with a similar crossbar frame design.

Measuring 565 x 208 x 520mm (HWD) and tipping the scales at just under 25lbs, the Panzer G's rather imposing design is constructed of steel, plastic, and tempered glass panels. The black on black paint scheme gives this chassis a bit of an ominous, sinister look. The top panel of this chassis is darkly tinted tempered glass, held in place with four thumbscrews, with mounting locations for two 120mm or 140mm fans and a magnetic mesh filter directly under it.  The area where the top and front panels meet is home to two USB 2.0 ports, a pair of USB 3.0 ports, a large power button, and headphone and microphone jacks.

The left, right, and front panels are tempered glass as well. Like most cases equipped with tempered glass panels, the Panzer G uses rubber-coated locating pins and thumbscrews to secure the panels to the frame. Air intake vents on either side of the top and front panels provide a direct path for fresh air to be drawn into the chassis. The front and top panels have cut-outs along the sides to allow air into the chassis as well. Much like the FSP CMT510, tabs at the bottom of the side panels require tilting them 45° out and away from the chassis before lifting them up and off the frame.

The bottom of the case has two filter-covered holes, one for the power supply, one for an optional 120mm fan, as well as four large, rubber-coated plastic feet.

The rear of the chassis is home to seven card slots, a motherboard I/O area, an opening for a bottom-mounted PSU, and an exhaust-fan mounting location for 120mm fans.

The fan filtration system is fairly robust in terms of its ability to prevent most dirt and dust particles from entering your system. As mentioned earlier, the metal mesh filter on the top of the case is attached by magnetic seals at the edge of the filter. The large filter in the front of the chassis also attaches to the frame via magnets. The weak point in the filtration system would be the filters located in the bottom of the chassis. Cleaning and maintenance requires turning your system complete on its side. A third magnetic filter in this location would be a better solution.