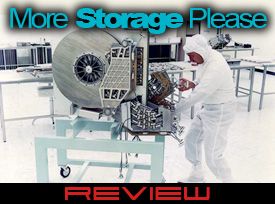 When you hear the name Intel, you automatically think of processors, which proves that the company’s marketing machine has done its job. But beyond CPUs, the mainstream sometimes forgets that Intel also has remarkable mindshare in the business sector. And that’s where its relatively new NAS solution, the SS4200-E, comes into play.

Part of Intel’s success in the server market is attributable its cooperation with VMWare, a part of EMC, the enterprise storage specialist. This has led to synergistic effects. At the end of 2007, EMC announced a new consumer product line, which hit the market at the beginning of 2008 under the name “Lifeline.” Before this, EMC was primarily focused on business customers with their storage products.

Intel wants to get into the growing storage market with NAS systems for home use, and so it took advantage of its relationship with EMC to do just that. The result is the new SS4200-E NAS device, which is primarily built for small businesses and private users. It is unclear whether or not there will be more devices in the future in this hardware/software constellation.

NAS Device On An x86 Platform

Most manufacturers use embedded motherboards for their NAS devices, which are characterized by having the processor, RAM modules, and other components typically hard-wired onto the platform itself. To save space and reduce energy consumption, they usually don’t come with additional interfaces or expansion slots. The processors used for those systems are usually based on the ARM or PowerPC architectures and the operating system (firmware) is stored on an integrated flash module instead of a hard drive.

In contrast, Intel has put a low-voltage LGA775 Celeron 430 processor in the SS4200-E. The processor is clocked at 1.6 GHz, supports FSB800 (effectively) and has 512 KB of L2 cache. In addition, the motherboard comes with a 512 MB DDR2 RAM module, which can easily be upgraded by the user to 1024 MB based on Intel’s compatibility list. The southbridge chip is an Intel ICH7R and supports four SATA 3 Gb/s devices with RAID modes 0, 1, 10, and 5, as well as two Ultra ATA devices.

Users who love to experiment and tweak their hardware should get really excited when looking at such an open system. On the following pages, we will tell you what performance level you can expect from the Intel SS4200-E NAS in its default configuration.

Next Page Build, Technical Data, And Power Consumption
Topics
External Storage
Intel
Storage
16 Comments Comment from the forums
Be In the Know