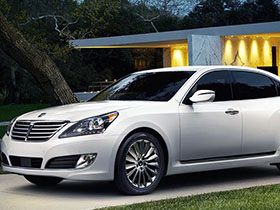 It’s hard to believe that a company responsible for such terrible cars as the Scoupe and Excel in the late 80s is now one of Detroit's toughest competitors. Hyundai managed to massively change the perception of its brand over the last decade. Little by little, vehicles were improved, the line-up expanded, and confidence was bolstered through comprehensive warranty coverage.

After enjoying success in the subcompact, compact, mid-size, and full-size segments, Hyundai set its sights on the luxury market and introduced the Genesis sedan in 2008. That platform also spawned the Genesis Coupe, the company’s first rear-wheel drive sports car, which we spent a week in for 2013 Hyundai Genesis Coupe 3.8 Track: Telematics And Infotainment.

But Hyundai didn’t want to stop there, adding the Equus to its portfolio in 2011 and giving the Genesis sedan an even more luxurious brother. Actually, that's not entirely true. The second-generation Equus surfaced first in South Korea back in '09; it didn't hit U.S. shores until two years later. Hyundai updated the Equus for its 2012 model year with an eight-speed automatic transmission and gasoline-direct injection-capable engines.

The 2014 Equus features exterior styling changes, an improved interior, and newer technology-oriented features. As soon as we saw it, we knew we wanted to jump in. After all, the idea of a luxury-oriented Hyundai seemed so foreign. Could it really contend with more expensive competition? Lucky for us, Hyundai's press car made a short stop in the Seattle area, giving us enough time for a week with the company's top-end offering.

That word luxury conjures up certain imagery. Mercedes-Benz, Audi, and BMW are the three brands you probably associate most closely with the concept. However, when you want a car with lavish functionality from one of those German contenders, it's easy to sail right past six-figure price tags. On the other hand, Hyundai's Equus sets its sights on Lexus' still-snazzy but not as stylish LS460, which starts north of $72,000.

Can Hyundai continue transcending its reputation as a purveyor of low-cost vehicles and storm the rarefied luxury space so brutally contested by the Germans and Japanese? Our week with the 2014 Equus should answer that question, at least from a technology enthusiast's point of view.