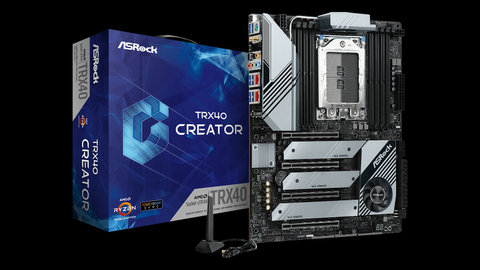 We set our memory to XMP mode for all three boards, which allowed them to run at DDR4-3600 CAS 16. Amazingly, this produced higher memory bandwidth than the previous-page’s OC settings for both ASRock boards. And while the Gigabyte board had a far greater benefit from overclocking, its stock bandwidth was somewhat poor compared to the ASRock samples.

Performance differences are too small to draw any broad conclusions from 3DMark and PCMark results, though the TRX40 Creator wins more often than it loses.

Ashes' “High” settings are rather mediocre by modern standards, but the TRX40 Creators lead at those settings isn’t. It’s odd then that it slightly trailed the TRX40 Aorus Master in F1 2017.

Less time is more performance in timed applications, and the TRX40 Creator fell behind in both 7-Zip compression and Handbrake H.264 workloads. Those losses might not be noticeable to a real-world user, but are certain to impact its overall performance average in our efficiency and value charts.

The TRX40 Creator drew a little more power at idle than either of its competitors, though differences this small aren’t likely to persuade customers.

Wins in games and losses in timed apps put the TRX40 Creator dead center in overall performance. We’ll just move that baseline to zero before going to our efficiency calculations, since we wouldn’t want anyone to accuse us of calling anything “greater than 100% efficient”.

A power increase of 0.6% leads to an efficiency loss of 0.6% when compared to other boards, since the TRX40 Creator’s performance level is so close to the group’s midpoint.

This is the point where we always talk about value in terms of features per dollar, since the performance between different boards is typically close enough to guarantee a performance-per-dollar victory to the cheapest board. But perhaps the TRX40 Creator is a board with both more features and a lower price?

After all, it’s the only board in this group to have 10Gbps Ethernet, and it doesn’t even sacrifice the 2.5Gbps port offered by its competitors to get there. It has both.

On the other hand, it lacks the big voltage regulator of either competing board, which means that the TRX40 Creator probably won’t be well suited to overclocking the upcoming Threadripper 3990X. Then again, give the thermal constraints of placing so many cores in such a small space, overclocking those might not even be possible. Time will tell.

One tiny concern that remains is that the TRX40 Creator’s slot layout is optimized for four-way SLI in an era where most current cards can’t even be configured in three-way SLI. Maybe it’s for extra monitors? Or GPU compute configurations? The later is at least plausible, but we have a feeling that more creative types would want an extra storage card than a third or fourth graphics card, and the only way to place two triple-slot cards and a storage card into a standard ATX case is to put the slots in positions 1, 4, and 7 (with storage on the bottom) or 1, 4, and 5 (with storage in the middle). Neither of those is possible on the TRX40 Creator, but maybe you have something else in mind? Let us know in the comment below.