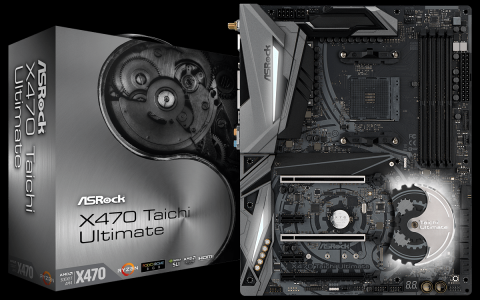 We enable the CPU/Chipset manufacturer’s power-saving features in firmware prior to running our basic benchmark and power tests. We also disable XMP memory mode, since some manufacturers have tied it to a CPU overclock when applied to certain chipsets.

We’re slightly surprised to see the X470 Taichi Ultimate outperforming the X470 Aorus Gaming 7 WiFi in 3DMark, though its performance advantage is less consistent in PCMark. Sandra shows both boards producing very similar CPU and DRAM performance, but there are probably other ways to optimize firmware for benchmarks.

The competing Gigabyte board edges out ASRock’s X470 Taichi Ultimate in Ashes and F1 2015, but then gets edged out in Metro LL Redux and Talos.

Remembering that less completion time means better performance, it’s interesting to watch the Aorus and Taichi board’s swap positions across the field. The biggest loss was found in the X470 Gaming 7 WiFi’s “After Effects” completion time, but the same board finished PowerPoint quickest.

Easy tuning gave the X470 Aorus Gaming a boost in DRAM overclocking, while the X470 Taichi Ultimate edges that board out in CPU overclocking. Reports of four DIMMs being harder to overclock than two appear unfounded for the Ryzen 7 2700X’s memory controller.

We used the average of the two X470 boards for our value-chart baseline, which shows the 17.4% price difference between these boards as a negative value score for the better-equipped board. The larger question is whether its equipment level is 17.4% better.

Compared to the X470 Aorus Gaming 7, the X470 Taichi Ultimate gains a 10Gb/s controller and several CPU voltage regulators, but loses the 1.73Gb/s Wi-Fi controller to a lower 433Mb/s model. Network configuration alone would make these two boards similarly valuable, depending on the buyer’s needs and/or desires. Still, it would have been nice if the board that has a 10GbE connection plus 1GbE plus Wi-Fi could have included fast Wi-Fi to become the centerpiece of your home connectivity needs. Or you could just get a router and an access point...

We loved the X470 Taichi Ultimate’s CPU overclocking capability, but found DRAM overclocking unnecessarily cumbersome. A quick look back at its firmware RGB control menu completes the feeling that the firmware lacks every finishing touch. Users who would stop at simply enabling the XMP profile of their AMD-listed DRAM won't have those issues, and the rest of the board functions well enough to satisfy most needs. High-end AM4 motherboard buyers who would like to save a little bit of cash on the Aquantia 10GbE controller (compared to a discrete card) and use AMD-approved memory at its rated settings will find good value in the X470 Taichi Ultimate.