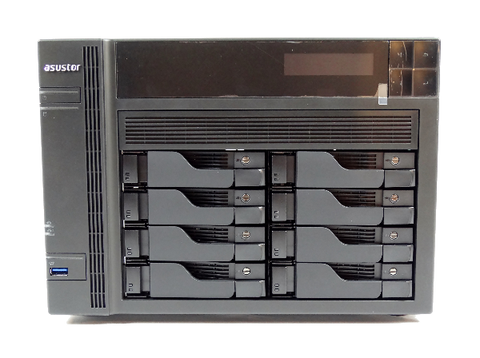 Asustor built a software installer that allows you to find the NAS on your network. The tool also walks you through the initial configuration to set an IP address, build an array and dial in other settings. You can even use the built-in display and buttons to initialize the drives and work through the settings.

Once the local installer tool finishes, your browser opens and presents you with a log-in screen. From there you can enter the NAS.

If you skipped over building a drive array in the initial setup, you'll want to do that first. Formatting only takes a few minutes, after which the array is ready to accept data. Post-format, the system scans your drives. You can access the array at that point, though transfers are slower.

Then it's time to work on customization. In the screen on the left, you can configure the LCD with a personalized message or instruct it to display different status updates. You can also program the LED lights on the front of the chassis.

A lot of folks use NAS appliances to back-up their desktops and notebooks. The system is easy to configure for those tasks. On the front of the AS5108T is a USB 3.0 port with a button surrounding it. You can configure Asustor's platform to either save files from the USB port to the NAS or send data to a thumb drive from the NAS.

DHCP is supported, naturally. And even if you're not familiar with Ethernet topology, you can still take advantage of the advanced cloud features. The AS-5108T has an EZ Button. With just a few clicks, Asustor's system will reach out to your router and change the necessary settings for you.

A great number of modern NAS appliances are infused with in-house and third-party software features. Asustor, in particular, leaves no stone unturned. There are so many available applications that we can't list them all, much less explain what each does. You can scroll through the list on Asustor's App Central, though.

If you run into any issues, the Dr. Asustor section will either set it straight or help you with support. It's a nice feature only available through Asustor.

Although there are several different software options for playing back multimedia files, Asustor utilizes KODI for its AS50- and AS51-series products. The AS5108T we're testing today has a maximum resolution of 1080p through its HDMI port; 3D video playback is enabled as well. The system also supports up to 7.1-channel audio via HDMI or S/PDIF.

In theory, the AS5108T allows you to divorce yourself from a cable package and still watch live TV. But you need a high-speed Internet connection first. Then, you'll have to jump though a few hoops to configure the capability. Bear in mind that not all of the plug-ins would pass a legal challenge (Asustor doesn't own or govern the third-party plug-in system).

Asustor has a number of applications for different operating systems that let you access data from any device. All you need is an Internet connection.