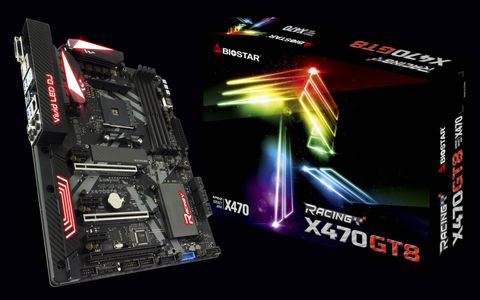 Biostar also includes a firmware updater for Windows and a direct email sender that requires users to enter a return email from which to retrieve Biostar’s response.

The Racing X470GT8’s firmware GUI opens to its Main page. Digging into the Advanced page, we eventually work our way down to the CBS menu, which typically offers a variety of memory options under its UMC submenu. Biostar’s CBS options are far more limited than some of its competitors, however.

Digging around in the UMC options of the CBS menu and finding the correct settings was never easy, but the limited settings of the Racing X470GT8 almost makes it pointless. We’d rather overclock our DRAM from the simplified O.N.E. menu anyway. And that’s still an option.

The great news is that the Racing X470GT8 pushed our Ryzen 7 2700X CPU to its highest-yet stable overclock of 4.30GHz, using a 1.40V core setting that dropped to 1.344V under load using the board’s most-aggressive “Level 6” CPU Load-Line Calibration (droop compensation). We find it peculiar that a board with less-aggressive voltage compensation provided our highest-yet overclock in spite of its lower loaded voltage, but better (smoother) voltage regulation could produce such a finding.

You’ll notice that the DRAM timings were left at “auto” in the above screen shots and that the memory was left to its DDR4-2933 XMP value. Loosened timings allowed our memory to reach DDR4-3200 on the board, but we couldn’t get it to stay stable under extended testing. And DDR4-2933 performs better at CAS 16 than at our CAS 21 limit.

Keyboard function keys bring up fan (F5) and LED (F6) control menus. While the manual shows a menu with PWM or DC fan control selection, the Racing X470GT8 doesn’t have the necessary hardware to switch from PWM to voltage-based fan control. Neither of these menus support the board’s F11 screenshot saving function, which forced us to dig out our old VGA2USB capture device, along with a VGA-compatible graphics card, to capture these last two images.