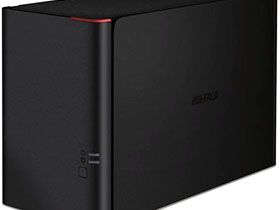 Buffalo is no stranger to the network-attached storage world. Surely that means the company has learned all of the lessons needed to build successful products, right?

The technology inside Buffalo's LinkStation 420 is fairly typical of entry-level NAS hardware. Its Marvell Armada 370 SoC consists of a 1.2 GHz ARMv7 processor with 32 KB of L1 instruction and 32 KB of L1 data cache, a 256 KB L2 cache, and a 16-bit DDR3 memory interface. To that bus, Buffalo attaches 512 MB of memory. The SoC includes two Ethernet MAC controllers, support for a pair of SATA ports, and a USB 2.0 controller, so connectivity is somewhat limited. There's a single GbE jack and one USB 2.0 port exposed on the device. USB 3.0 isn't yet standard at the entry-level.

Buffalo gives you a choice of two 1, 2, 3, or 4 TB hard drives already installed in its LinkStation 420, obviating the need to study a hard disk compatibility list and picking storage yourself. The sample we're testing came equipped with a pair of 2 TB Seagate Barracuda ST2000DM001-1CH1 3.5" drives.

The LinkStation 420 sports a BitTorrent client, a DLNA server, an iTunes server, a print server, and a USB device server. It can also serve as a Time Machine-compatible backup target for a Mac. When it comes to backing up its own disks, the LinkStation 420 is able to use attached USB drives or another NAS server.

Buffalo doesn’t try to get fancy with its design. The LinkStation chassis comes in basic black and is quite small. The front bezel sports but two status LEDs and one button (and that's not the power button; the on/off switch is in the back of the appliance).

Both drive bays are located behind the front bezel.

The hard disks are not latched in the drive bays, and can simply be pulled out. We're not sure that's the most effective way of security storage. But really, the front bezel won't typically be off, either.

The hard disks are mounted in plain, but functional trays.

The back side of the NAS is also quite basic. You'll find one GbE jack and a single USB 2.0 port. Since Marvell's Armada 370 SoC does not sport USB 3.0 connectivity (and indeed tops out with two SATA interfaces, even), the LinkStation 420 can't offer that functionality without a third-party controller attached to one of the processor's two PCIe lanes. This is an entry-level device though, so Buffalo simply sticks to what Marvell integrates. Other manufacturers do offer third-gen USB and HDMI, so the omission of both is a bit of a bummer.

The power switch is just that, a switch, and not a button. If you want to shut down the NAS, you simply turn it off.