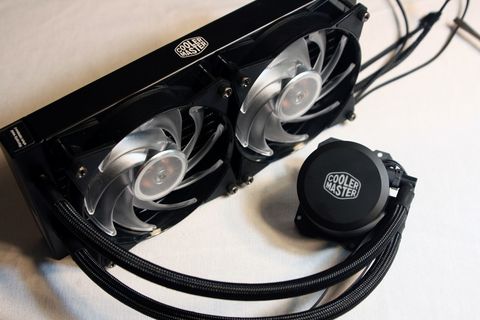 We use CPU cooler data testing from previous reviews to provide standardized results for comparison. We will be testing the Cooler Master Master Liquid ML240L with the Arctic Liquid Freezer 240 and the Gamer Storm Captain 240, with all coolers in top-exhaust configuration (pushing air through the radiator core rather than pulling air through).

The Intel i7-5930k clocked at 4.2 GHz powers the thermal load for our test system, and we can immediately see that the ML240L provides us with very impressive temperatures configured with fans at both full and half speeds. With the ML240L fans at 50%, it still turns in better cooling than the Captain 240 at 100% fan speeds. And the ML 240L, with fans at 50%, is right on the heels of the Arctic Liquid Freezer 240 with 100% fan speed.

Cooling efficiency and capability is often directly related to noise levels produced by the fans. Given that most closed-loop, all-in-one coolers utilize a fairly dense radiator fin layout to maximize surface area in a small core radiator, they must exploit fairly high RPM fans. And of course, the faster the fan blade rotation or the more surfaces to disrupt airflow (such as radiator fins), the more noise levels increase.

We can see some very telling information when breaking down noise levels after evaluating the thermal load results. The Cooler Master ML240L provides better temps than the Gamer Storm Captain 240, and it does so at lower decibel levels. The Arctic Liquid Freezer 240 runs more quietly than either of them, but at the expense of hotter reported CPU temps at load. Given that 50 decibels is approximately the noise level of a quiet office setting, this is quite acceptable, especially when you setup the fans to use PWM control from the motherboard, fan controller, or other means.

The Cooler Master Master Liquid ML240L provided us with some very pleasant surprises in terms of performance, simplicity of installation, sleek design, and standard 16.7 million color capable RGB LED lighting. At time of release, the Master Liquid ML240L has an MSRP of $69.99, making it a very solid performing cooler at a very attractive price.

When you add the value of the RGB fans and pump using either manual or supported motherboard control capability, you really do have a solid liquid cooling solution that adds tasteful color to any PC it is cooling.